Lighting and a new controller

I do some programming work for an insurance company in the USA. I have just completed my recent tasks and, thus, have received a payment. Some of this has gone towards purchasing a new controller. Having had a bit of a bad experience buying 2nd hand, I thought that I might buy a Marklin CS3 but then I was bothered if anything went wrong, I would have to return it to Germany. I, therefore, decided that I would purchase an ECOS from Coastal DCC, my regular DCC suppliers.  I realise that Kevin of Coastal would have to send the unit back to ESU if anything did go wrong but at least I would be dealing with someone that I know and trust.

I am extremely happy with the unit. I have just said to my wife that I think that it is the best DCC controller that I have ever had. It was extremely simple to set up. One of my locos was missing in the built-in lok list but it was very easy to download it from the ESU web site. Having entered all of my DCC points into the controller, I can now operate them using a touch screen and without having to remember their code numbers. I know that I can do this with JMRI but my wife has banned any computers from the bedroom so I have to find other ways. (I haven't explained to her that the ECOS is just a Linux box in disguise but...). 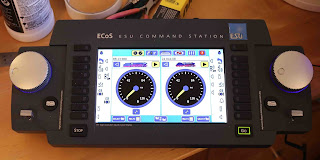 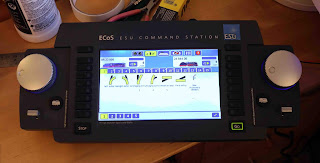 As this railway is quite compact and is, what I like to refer to as, a "Train Set", I am trying to make it have a bit of life rather than being a serious model railway. One way to do this is to install lighting so that we can run dusk and nighttime sessions. I have shown how I have been building little circuit boards with LEDs attached. This is OK but a bit of a faff making them every time that I want to light something. I now have a solution.

I wanted to light the carriages but didn't want to spend £20.00 on each carriage by using the Train-Tech units. These are very clever but don't light u until the train moves, which doesn't strike me as too prototypical. I found a company called Layouts4U that have lighting units at just £6.00. These units come with an LED strip, some wires, a battery and a reed switch. You install the reed switch in the roof of the carriage along with the LED strip. Wave a magnet over the roof and the light comes on, wave it again and the light goes off. Brilliant!

I have fitted a set each into two of my Rheingold coaches and then tackled the little four wheel local carriages. I found that, as they were quite short, I could cut the strip and light two carriages with one set. There are two tiny black wires that go from the controlling carriage to the slave.

I have now ordered a 2m length of LED strip and am going to install some into the new Goods Shed. Having 2 metres of this will mean that I can light all of my forthcoming buildings easily. They can all be connected to my under-board lighting circuit and be switched from the front panel. 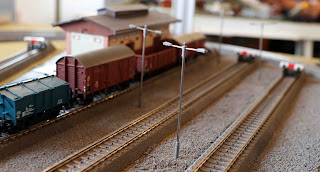 I have been on a building binge. I talked about both of the stations in the last post. Since then I have bought two houses, a Bakery/Butchers (Bakerei and Metzgerie) and  a fun fair! The fun fair is to go beyond the reverse loop whilst the houses are for the station area. One big mistake. I was happily building the Bakery when I wanted to place some people around it. The people looked very tall and I found out that I had bought, and spent 7 days building, an N scale model! My wife likes pretty things so it has gone on her shelf and a replacement kit ordered. 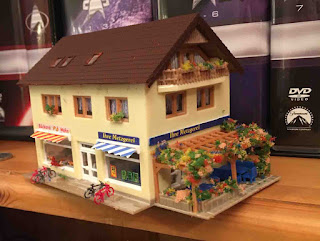 I nearly had a crash on the railway a few weeks back when I was trying to shunt some wagons in the yard and run a train around the outside. Some yard operations require coming out onto the main. I did this and had a great fumble trying to stop the resulting mayhem. I thought about this and decided that a signal was the way to go.  On my next order with Lippe, I  placed one for a Märklin 70391 Home Signal with a Narrow Mast. This is a digital signal and incorporates a feed to the track that is under its control. I also ordered the bits to make the point onto the main be digitally controlled as well. I gave the point and the signal the same DCC address (well Märklin MFX address) and now, when I switch the point, the signal goes to danger and it removes power from a length of track running up to the signal. Switching the point to the main puts the signal at clear and power is restored. That keeps everything tickety-boo.


How is it so far

Everybody tells me that this is the best railway I have ever built which I agree with. It is great fun just to switch it all on (thank you Alexa!) and run some trains for a few minutes and then turn it all off again. I have avoided building a plan of the railway on the ECOS because that is getting a bit too close to JMRI. I can't see how it will keep me going for years but then its life is dependent upon the room that I have to use so who knows what is going to happen and when.
Posted by Long Haired David at 04:43 No comments: