Further to the Turntable plus a new RDC

No photos this time. I will post some over the weekend.

The turntable is proving to be very frustrating. I seem to have messed up on the internal connections for the track power and the unit is all super-glued together so it's a major drama to take it all apart. Also, super-gluing the track rainls to the turntable deck is proving to be very flaky. they keep springing off so I will probably replace the deck with a piece of normal rail and re-wire the track connections.

My short line - the Sunset and North Eastern connects to a larger railroad, which exists as two lines coming from nowhere and going to the no place - I seem to remember that line from Popeye?. I thought it would be a good idea to have a twice daily Budd RDC travel in from ther connecting line and run through to the S&NE terminus. I went in search of a Proto 2000 RDC. A model shop here in the Uk had one on their EBay store at a delivered cost of £42 but I dithered too long and missed it.

I then went to Walthers and found that searching for a proto 2000 Buddf resulted in hundreds of hits which made it impossible to find what I wanted. If anyone can tell me how to use Walthers search and find what i want then that would be rteally useful.

Ifinally found an undecorated one on an EBay shop from A ustralia which sent it here at a total cost of £43 so I got a great deal.

problem - the RDC is scale length and does two things on my 'cr*py' track laying. At the bottom of one of the grades, it stretches oevr the transition and loses power and on one of my curves it stalls. I will take some photos of these two problems but it does highlight my inability to lay good track :-(

Thanks all for now - as I said, pictures over the weekend.
Posted by Long Haired David at 02:01 2 comments:

Turntable in and running - sort of

I have mounted the turntable and wired it up. It works fine in one direction but it is not happy in the other. I think I must have missed a washer from the topside but I don't remember having anything left over so maybe not. I think that I will have to cut some styrene to make a washer, however, if I want it to run smoothly in both directions.

There are no rails on the turntable as these have to be laid using track gauges. I have ordered two Kadee ones but these only arrived today (I did the turntable work last weekend). This is a test to check that everything works with the weight of a loco on there. I used a diesel to make it easier to mount. Putting a 2-8-0 tender loco (see in the background of the video) would have been a bit trickier without rails.

I now have the gauges so I am hoping to install the rails and the access track this weekend, so watch this space.
Posted by Long Haired David at 10:07 No comments:

The turntable is in place

It doesn't work too well in one direction but fine in the other. I think that it needs some further support around the hub as it seems to rock too much. Maybe I left a washer out although I don't remember there being one left over.

Posted by Long Haired David at 14:29 No comments:

As the layout is run by DCC then it makes sense to have the turntable controlled in the same way.
I have a ZTC255 chip spare that has a 2Amp capacity so that is ample for running the turntable.

First off, though, I did a lash up to make sure everything worked. Remembering the mantra - red and black to the track, orange and grey go away, I soldered up the motor leads to the orange and grey (remembering to put some heat shrink over the wires first. Then I connected the red and black to some wander leads to get the power in. As you can see from the video, it worked!

The chip is addressed as 99 to keep it clear from the loco chips I have running.


Needless to say, there is lots that still needs doing - like setting the turntable into the baseboard etc. but, hey , this is more fun!
Posted by Long Haired David at 12:25 No comments:

I have got a Walthers Turntable and their motorising unit. Making the turntable was easy and fitting the parts for both motorising and powering the track were also easy. What has not been easy is fitting the track. I decided to buy two Kadee track gauges but bougth them from a guy on EBay in the US. I have had some great results buying HO MR stuff on EBay.com but this time, I have waited two weeks and received nothing - :-(

Anyway, here is the turntable on its first test.

Hopefully when my track gauges come, I can fit the track to the platform..

Here is a picture of it in-situ, but not finally fitted yet. I first have to wire it for DCC so that will come in the next Blog posting. 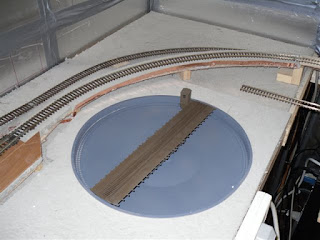 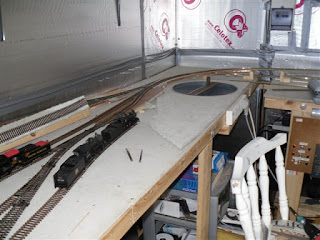 Click on the pictures for a larger image (use the back button to come back here).
Posted by Long Haired David at 10:47 No comments:

Sunset and North Eastern is GO!

All Change - Sunset and North Eastern is GO!

So the space was too small. I moved to the garage with the intention of doing an English Seaside resort in the 50s but still didn't get to grips with it. So we cleared out the shed and used it for what we originally bought it for - a US outline Model Railroad!
I have always called my railroad The Sunset and North Eastern RR so that's what this one is. Having recently re-read Mixed Train Daily by Lucius Beebe - found in a bookshop when I was kindly given a trip on the Green Mountain Railroad in Vermont - a trip arranged by my good friend Dan Antion of Windsor Locks CT. I read this book when I was 20 and was entranced with the East Tennessee and West North Carolina RR - known to all as the Tweetsie. We even called our first cat Tweetsie in recognition of this. Hence I decided that a country short line was the way forward. More about that later but here is a video of one of the first smooth laps of the track.


The railroad is run using ZTC DCC so both trains are running under independent control. I hope to clear the top tomorrow so another post will give a better idea of what it looks like.
Posted by Long Haired David at 11:55 1 comment: