The station is to be named Ellerby after a kind relative that I had never heard of who left me some money in her will. She deserves some thanks.

Firstly, here is the track plan that I am working to.

I have changed my mind about the track. Due to some silly circumstances, I ended up using the normal Code 100 track (all because one coach had coarse wheels - and it turns out I won't be using that coach!).

I am laying the track on a bed of cork which I am sticking down using a wonderfully named product - Gloop! This is a special adhesive specially formulated for sticking plastic card to wood. It works brilliantly with one flaw. Get it on your hands and it is the devil to get off. I have spent two days with sticky fingers (wasn't that the name of a pop group?).

Here is the status so far. 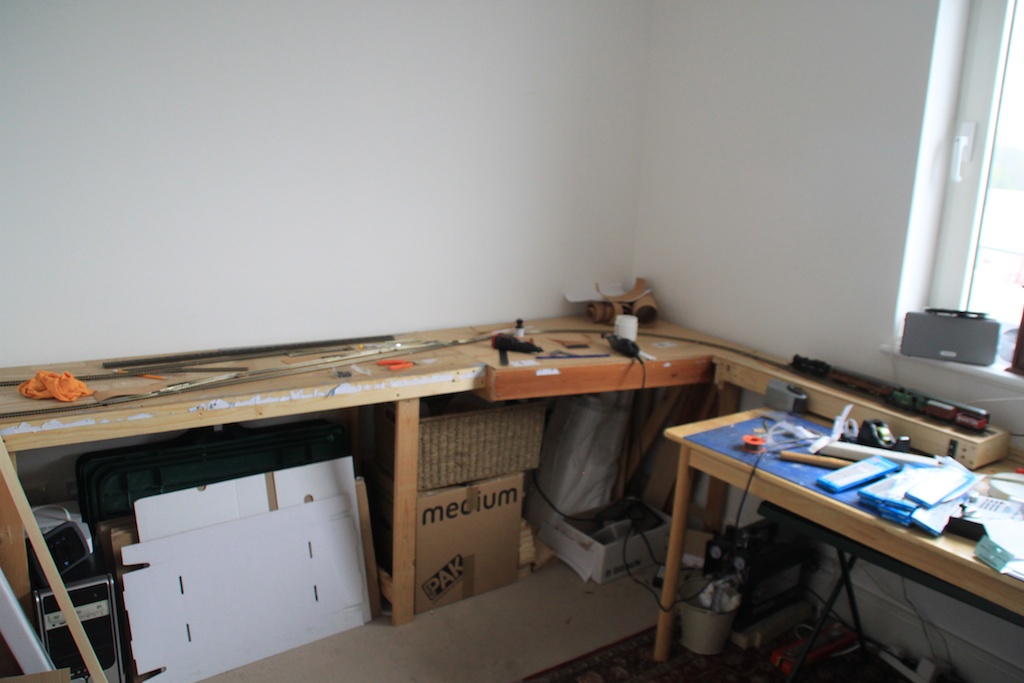 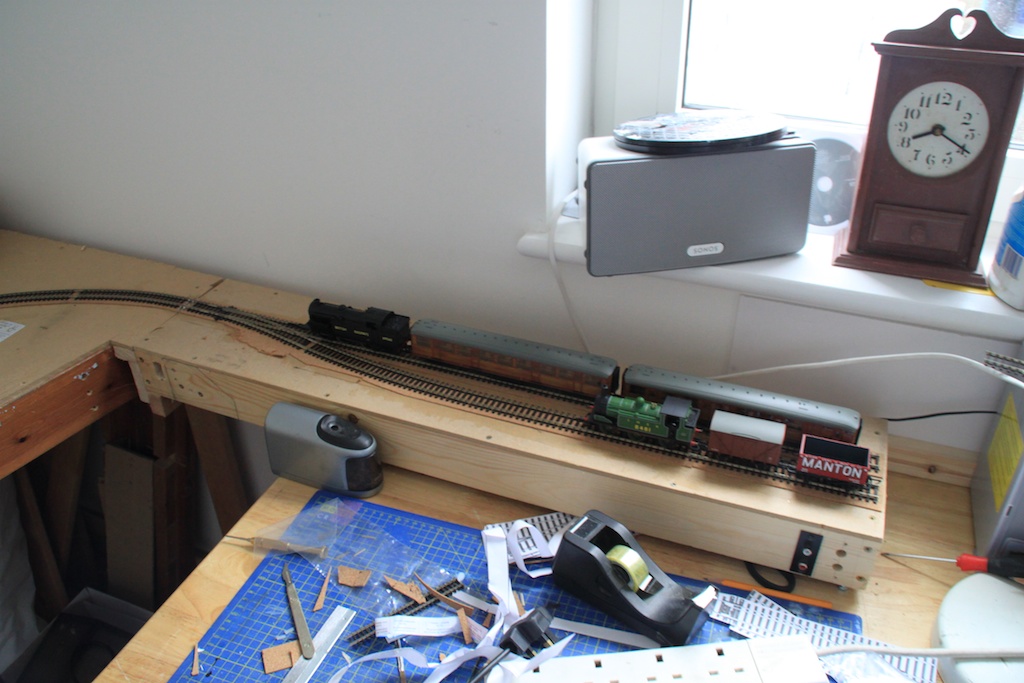 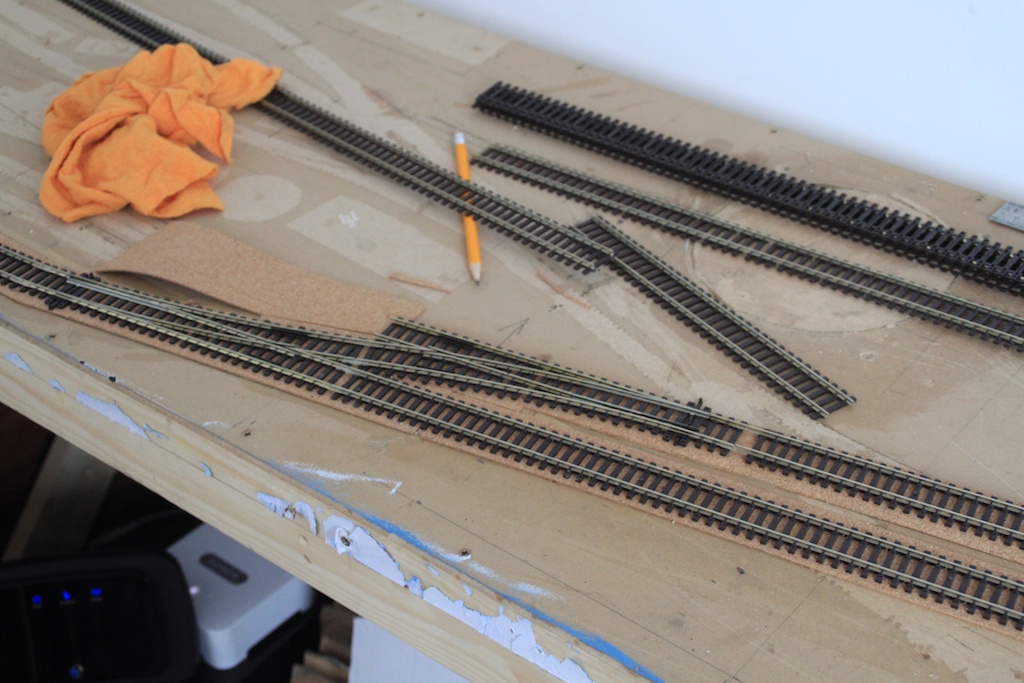 I am trying to keep the three boards as separate entities so that I can dismantle them for wiring underneath, etc. To show how this works, this is the join between the right hand board and the fiddle yard. 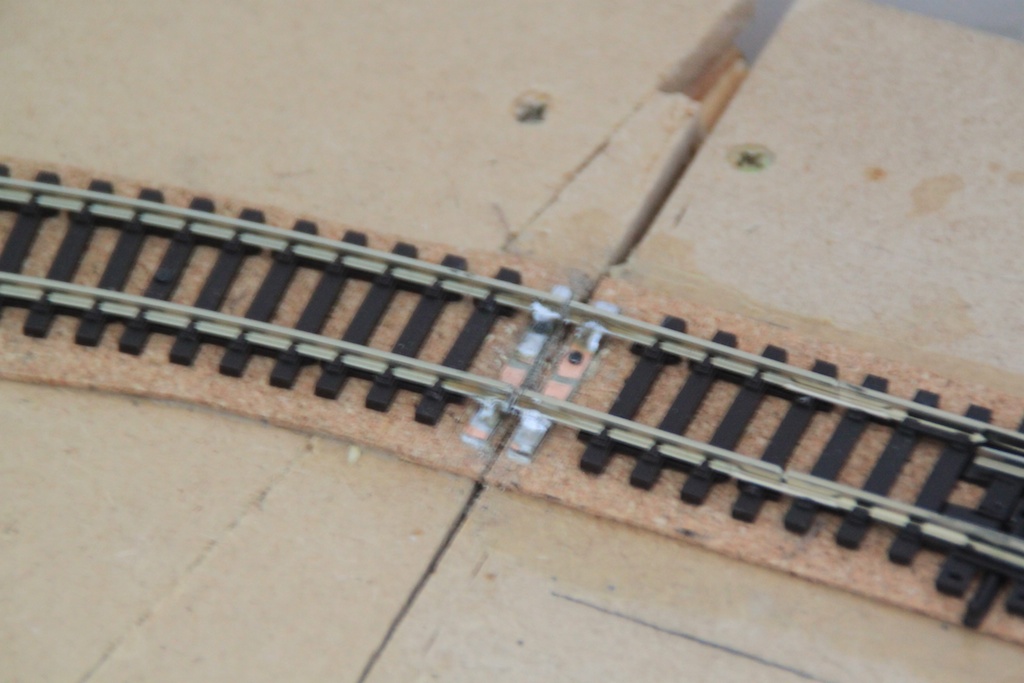 The track ends have been soldered to pieces of printed circuit board so that they don't get damaged when split.

I did find one enormous flaw. I saw a nice LNER/BR train in a special offer at Scograil. It comprised an N2 loco and two teak coaches and was celebrating the Olympics - the train in the set being from the 1948 Olympics. As you can see, the fiddle yard isn't long enough for this simple train to clear the point. Mind you, the fiddle yard board was built for N Scale train lengths. 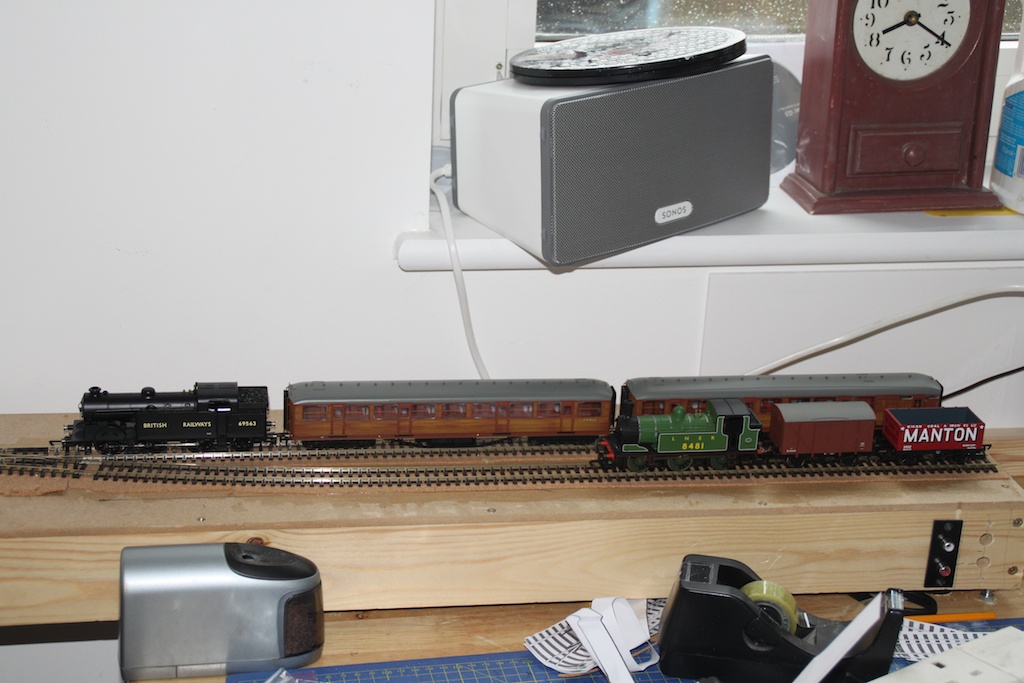 One of the first tasks this weekend is to add another 20" on this board to give both lines plenty of capacity.

I am having to go to the shop every day to pick up a bit more track. Each time I do, I pick up some more goods wagons so i am slowly building up my stock.

More tomorrow. I have to update the track plan as I have added an extra siding in the goods yard.
Posted by Long Haired David at 13:28 No comments:

I have to tell you that the Sunset North Eastern is no more! Did I hear a big Ahhhhhh - no, well I am not surprised. Firstly, a little background. I have mostly been developing US outline model railroads through most of my life with very occasional excursions into British outline. This is not strictly true because I have rarely developed the ideas and the collection of rolling stock etc. into a working model railroad. I did get one railroad together a couple of years ago and got that to the scenic stage but I had to destroy that as we moved house and it was pretty tightly built into the room. I won't make that mistake again.

Once we had moved, I started on a new SNE but got a bit sidetracked. I have recently retired and, in the early days, I was feeling a bit useless and under-worked so I came up with the idea of writing a freight car routing app for the iPad. This would have an iPad front end and a web back end. I got a lot of  the back end written and had done a proof of concept for the iPad. I was very concerned about the complexities of the routing software and kept putting off starting that. In the meantime, I added to the complexity of the railroad I built in our new apartment just so that I could cover all bases with the app.

Just recently, I have been updating my photography software that I wrote 10 years ago and found that some images didn't conform to the standard EXIF specification. I spent 7 days of 6 hours a day struggling to resolve this and after getting not very far, decided that this wasn't something I wanted to spend my retirement doing. This put the iPad app in total jeopardy and finally, I decided that I would stop work on it. This put a very complex railroad at risk of demolition and I finally decided to do that.

One of my problems when designing layouts is that I always want to include everything that the prototype has, so my layouts tend to be very complex. I have decided that I am not going to make that mistake again. Hence, I have rebuilt the baseboards with the intention of building a very simple OO - 4mm to the foot - British Railways based small terminus sometime in the late 1940s. I have started gathering appropriate locos and stock - based at the moment on the part of BR that came from the London North Eastern Railway. This has an advantage in that I have very little experience of full scale US railroads - having only travelled from Windsor Locks CT to New York on about three occasions, but I can clearly remember life in the late 40s and early 50s.

I am also going to lay the track using Peco fine scale code 75 track so that this will look a lot better than the code 100 I was using. Here is a photo of the baseboards in place. 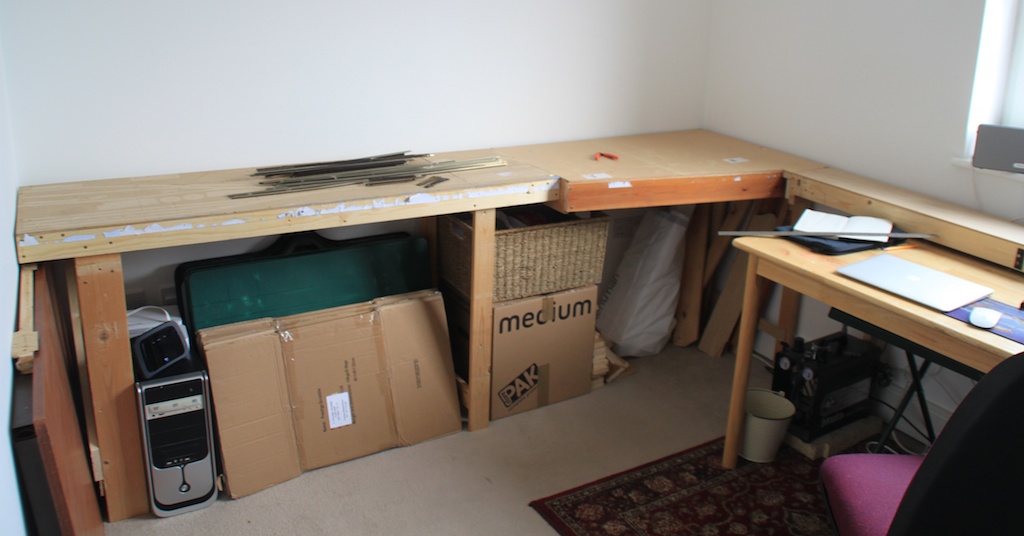 It comprises of 3 boards: 60" x 18", 38" x 20" widening out to 28" and a fiddle yard of 36" x 8".
It is totally free standing and will be completed as three separate boards so that I can take it down and move it if necessary. All of my US stock and track is now on EBay and I have an approved budget for the BR stuff. Additionally, I have a really great local model railway shop - Scograil - where previously I had to get most of my stuff from the US and shipping and import costs were very high.

I will keep you up to date with much more regular postings.

BTW, I have a new blog where I put out a daily view of life on the Ipswich Waterfront - www.waterfrontblog.co.uk. Check it out and sign up to follow it.

David
Posted by Long Haired David at 09:54 No comments: