SNE Wired up and ready to go

I finally have an SNE that I like and that will probably work! I spent a lot of time drawing layouts and  posted quite a few iterations on the forums. The plan went through a lot of changes. Not only that but the boards have been built with extra bracing so they shouldn't suffer the dips that appeared in the last one.

The layout is at a much lower level so that I can get to everywhere whilst sitting in my chair.The switches are all controlled by DCCConcepts Cobalt Digital switch motors so all of the live frogs are wired up. I have, also, installed two-colour LEDs on every point so that I can see which way they are set without standing up.

The boards were built in sections but they are now held together with strong tape so that there is no movement between them. This tape will be covered by the scenery as it goes down.

Here are some images of the current state of play. 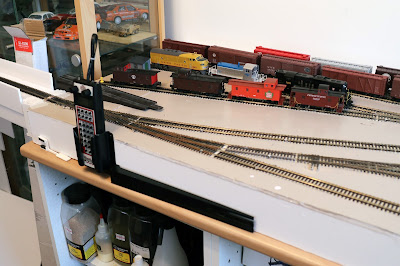 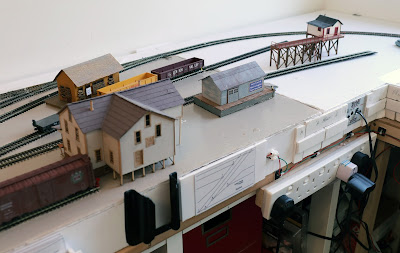 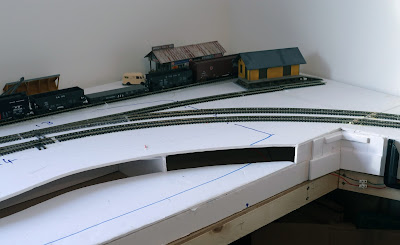 I have staging on both ends. This staging is build on foam core that has been turned into box girders. I have invested in a set of foam core tools and one of them is a v-cutter. This runs down a channel on the special FoamWerks straight edge and cuts a v-channel whereby the board can be folded with a 90 degree angle. This is extremely string and can span at least 5 feet without any flex. here is a shot of the end of one of the girders. as you can see, the v-cutter makes an excellent job of the cuts (such that you can hardly discern the "V" cut at all. 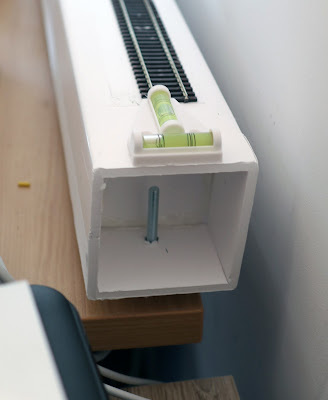 I have fitted a small level on the end and you can see the screw for the levelling foot, which is an M6 bolt with some foam core glued to it screwing into a T-nut. The other end is fixed to the base board. An added interest is that the desk is electric (in that it has a power lift and fall) which I use because of my arthritis - if I sit at it for any length of time my joints seize so I change the level on long sessions. This means that I then have to adjust the staging to get it back  to level as I never get the electric lift back to exactly where it started. The other end of the railroad is the same except that I have more space soI have fitted a wide base with two adjusters to get the levels right in both directions. 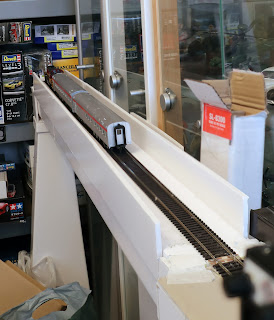 All joints across all boards are fixed with PCB sleepers and the track soldered in place. The sleepers are then glued to the foam board and we have joints with zero movement.

As you can see from the images of the layout, I have filled all of the spurs to get some idea of the capacity of each. With this information, I can incorporate this layout into the test phase of my university freight car routing project.

I am still getting used to my new DCC controller - I have one of the new Digitrax Evolution Duplex Starter sets (with the wireless controller). So far I am very happy with the set up. I have also got it integrated with JMRI. The eventual hope is to have the trains run from my phone and the routing software on my tablet. We shall see.

Next step is to mess about with the resistors on the LEDs as they are very bright and need toning down.