As I now have a system for car routing and train management, I need to move on and get JMRI working for control of the track. Ideally, I would like have JMRI controlling all of the points and then, as I have a defined set of trains, a route set up for each of those trains.
First step is to layout the track on JMRI and hook it up to the Digitrax system. I have a Digitrax Evolution wireless set up with a Digitrax PR3 connecting it to my iMac. As the run is a quite long, I have a powered USB cable connecting the PR3 to the iMac, which is on the other side of the room.

This video gives a good idea of the layout (sorry that it is a bit out of focus but you can see the essentials).


I have laid out the track in JMRI and allocated Digitrax IDs to all of the switches. The PanelPro panel looks like this: 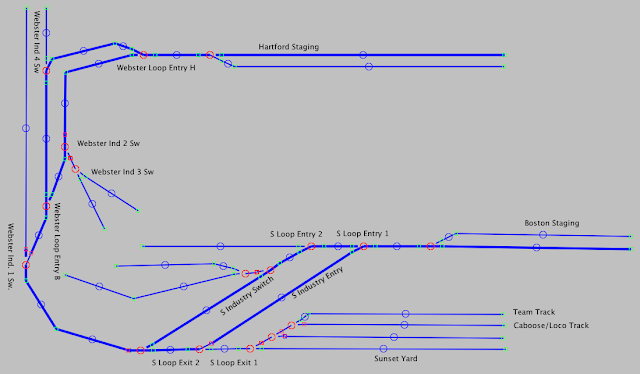 (Suggestions on making this prettier would be appreciated).

As part of my 470 Router project, I have a defined set of routes to which trains are allocated. This is the 470 Router output for those routes (still work in progress so needs prettying up). 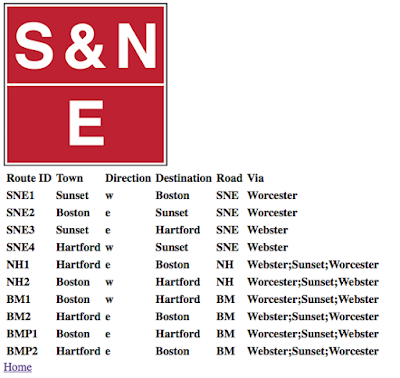 I went through each of these routes and built a JMRI route for each one. As it happens, NH1 (a Budd RDC that shuttles between Hartford and Boston) has the same route as BMP2 (which is a B&M passenger train that does the same trip) so I only had to define eight routes through.  There are 20 trains in the schedule for a single day and each of them has one or other of these routes.

Remembering that I can't stand up for too long so operate by wheeling an office chair around the railroad room, this saves me having to check that everything is set up for each train. When I am doing switching, it doesn't matter if the Boston bound freight is switching in the middle of the run or I am just preparing the next S&NE way freight. As soon as a train has to move around the layout, I can reset the route and know that I haven't missed anything.