I have had some extended discussions over on the Model Rail Forum. All of this resolved two big issues. One was the actual track layout, which was very much discussed and changed. The other was the name.

I have decided to call it Pennvale Sands. This is made up of the beginning of our surname and the beginning of my wife Valerie's name. The sands bit is taken from Grange-over-Sands which is on the Cumbrian coast just a few miles down from the fictitious location for my station up near the Lake District.

Another discussion was about the traffic into and out of the station. I had envisaged some constant coal traffic in that a couple of trains a day would come if from local places with short coal trains. - empty wagons These would then be put together and go out to the mines down in Lancashire and the same would happen in the opposite direction with loaded wagons. Some extra wagons would be added from our station. This is now a dead idea. I have been persuaded that it would be more interesting to make the creamery on the branch terminus into a wharf and then we can run fish between the branch and the main station and then onwards to London or wherever.

Also discussed was the goods yard that I had designed(!). It seems that I am still thinking US style as the large storage sidings were out of place in a station such as this. It would have a receiving and departure track and the individual tracks for, say, a goods shed, a coal yard and so on. There, also, was a bottleneck in the design where the double track became single track at the station throat and then went out to double track again. I was persuaded that this would cause issues later when I was getting to grips with the traffic so I did a redesign. I threw away the goods part, turned the layout upside down to put the station at the back and added a bay line to the platform area (for a bubble car when I can afford it).

There is now a head shunt for the goods yard and a release road in the station which means that a long string of coaches doesn't need to be pulled out to release a loco or, if the second line is full as well, the loco can still get out. Overall, I like this as it has opened up the board for something more than just track.

One problem, though, is the branch terminus. I have laid this down and set all the tube and wire point changers. This is the current layout.

However, the line to the fiddle yard is in the wrong place. In fact, it won't go to the fiddle yard but will now connect through to Pennvale Sands. The lower siding - to the engine shed - will now become the link to the rest of the layout. As you can see, when I change that, there is no access from the branch line into the passenger track so I have to lift the points and reorganise them. It strikes me that as I have had to redo the point tubes from one side to the other and extend one side for the new fiddle yard, it could be best to make a new board.

I have laid some track on the main board and am now wiring that part up to get some trains rolling. 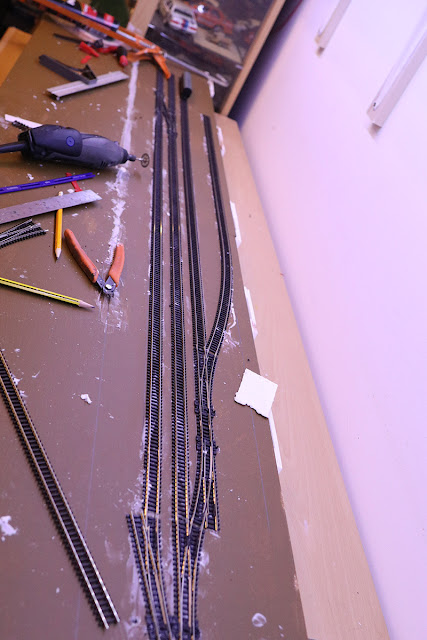 I now have plenty of room for my main line passenger trains!