I  have solved most of my problems:

Software - rewrote the lok allocation methods and now it works pretty much as I want it.
Lighting of coaches - not really solved but a "work in progress" for when I get more funds available.
Derailments - I bought a 7203 box of 50 close coupling heads. I replaced most of the Roco wagons and everything was going well. I then replaced the coaches and had lots of issues. It seems that the coaches are now too close! I replaced them with standard Roco couplers and now  everything seems to run pretty well. I would have used my spare relex couplers but my V60 telex coupling system doesn't really like relex couplers.

My next step is to do a deep clean of the track as there are parts where the loks just stop and need to be got across a few inches of dead track. Mostly, this is where I can't reach so I am going to take the board down and get to all the parts that I can't currently get to. This should solve the final issue.

Now on to my current project

I have three Faller houses and a Faller Butcher/Bakers. 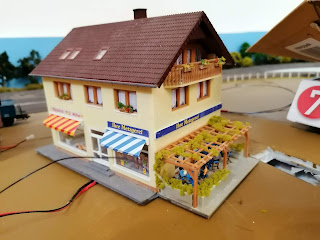 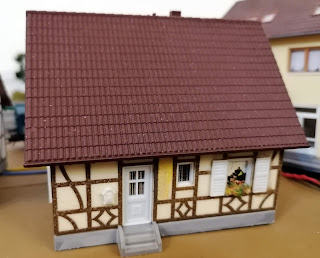 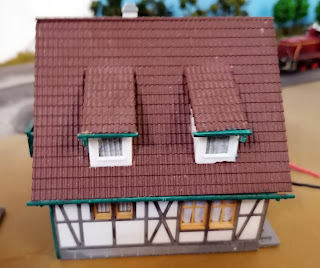 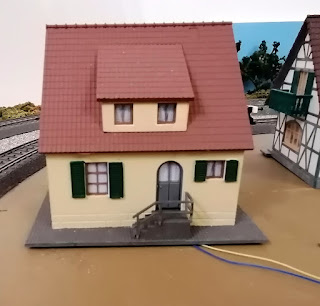 All have lighting installed. When I built the layout I made sure that there was a 5 volt bus ready for lighting buildings. When I started on the little village, I installed four sets of 5v wires ready to connect to the house wiring. To do this, I used some micro connectors. What I didn't realise was that there were two different types of connector. It shouldn't have mattered because the houses would sit ok as the sets of connectors were in good places for the layout of the village. However, I then bought a Kibri signal box that took up one of the sites. Hence, I have had to repaint the baseboard and  re-position the four houses. Now the connectors don't match!

I wasn't keen on cutting everything back and soldering up connections.I don't really like getting the soldering iron out except at my work desk. I have some heat connectors - a wire in each end - cramp up both ends and then heat the connector up with a blow torch. In fact, the blow torch is much more manually controllable than the soldering iron. It has a decent handle so would never be dropped. If I did, the flame would to out. It has a firm base so it stands firm. 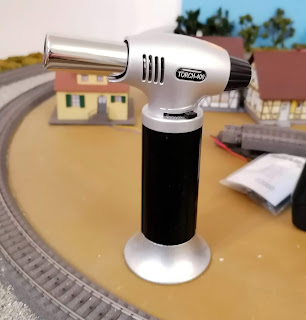 When I was putting the power busses together, I used what are called "Lever Nut Wire Connectors". These provide extremely firm wire connections. I have used the version that is designed for distribution of power - 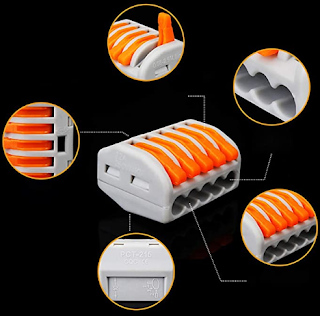 In this occasion, I wanted some line connectors and found a pack of 15 on Amazon. 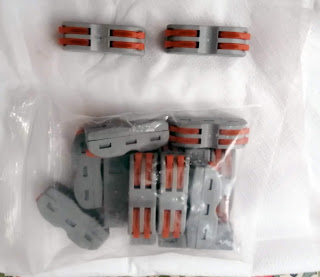 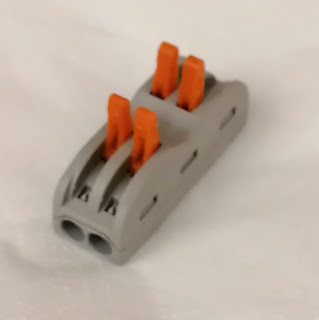 A quick trimming of the wires - both from the 5v bus and the houses - and then one of these connectors between each house and its feed should make it nice and easy for the start of the village.

Looks like you've been busy. Nice work. I like the idea that a small torch is better than a soldering iron.