And again and again

I am fated never to get a railway together. When ballasting the current switching layout, I managed to glue three points together so hard that they would not come apart to work. I could, of course, replace all three points but there is an issue with that. As I use foam core for my baseboard, pulling up a point that is stuck down will be catastrophic for the surface of the board. The strength of the foam core comes, not from the 5 mm of foam but the extremely thin layer of paper on both sides. Take some paper away and the board is ruined.

I now had to contemplate what to do and the answer, as always, was to "start again"! I was discussing the situation wit my wife when she asked why I hadn't been using the railway up to the point of the glue disaster. We talked about it and, as usual, Valerie had seen a flaw in the current arrangements. It seemed a good idea to have a small switching layout along the back of the desk but, in fact, it was difficult to use there and, as I have found before, once something is difficult to use, it never gets used!

I had been having thoughts about my Marklin set up against my current N scale and one thing had come to light. I really liked the use of Marklin C-Track. This is like Hornby/Bachmann track where you can put it together and take it apart easily. In fact, many Marklin fans have what they call "Carpetbahn" layouts - a muddle German for "Carpet railway". They put the track down for a few days and run some trains. Then, later, they take it up only to be put down again in the future in a different layout. I really liked being able to click the track together and then, when extending the layout, click some more on. There is one track system in N Scale that allows this - Kato Unitrack. I have seen boxes of it when visiting Scograil but never thought of using it before.

I searched around for some ideas and found out that there was a change in the way that points are operated using Unitrack. Each point comes with a built in point motor, so that is good, but the motor operates differently from most in that it is 2 wire, rather than 3. It seems that the point switches polarity when it changes so only two wires are required. I had a chat with Kevin at Coastal DCC about this. I now have a DCC Concepts DCD-SDC6 pack that contains 6 little units that convert the output of three wires from my ESU Switch Pilots into the required 2 wire operation. So, that is the techy bit sorted. Now, I have to learn a bit more about the track itself, and the use of these with an actual point.

Kato make a lot of combination boxes to extend the basic oval that comes with their sets. I have ordered a box that contains two points and some straights to make up a set of sidings.

It took me a while to realise that you don't get the oval in this box, just the sidings  - and £92 later, I have a set coming! Unitrack isn't cheap when compared to Peco but is similar to Marklin in cost so I should be used to it. Mind you, I don't have a friendly seller that offers me points, etc. at knockdown prices as I did with Adrian.

Valerie suggested that I forget about using the desk for my laptop, etc. and keep the top clear for the railway in a similar way to when it was in the bedroom. However, I am going to keep to the fixed dimensions of the desk and not extend outwards - 63" x 32". This should be ample for a nice N scale layout. I have searched the internet for track plans and found a nice one on the Kato web site. The one I liked is called Amhurst 2005. Now Amhurst is the huge model railroad show up the road from my friend Dan who lives in Windsor Locks, Connecticut. It takes place once a year and I would love to visit but... I entered the plan into Anyrail so that I could price it up. 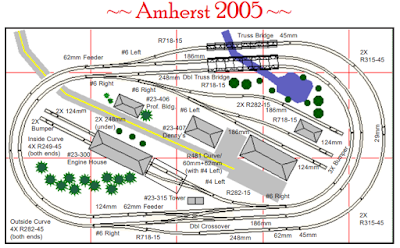 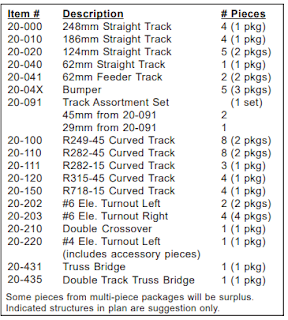 Valerie asked if I could print it out to see how it went. Just as well that I had entered it into Anyrail as it is easy to print out the track at 100%. It needs pasting together but it works very well. 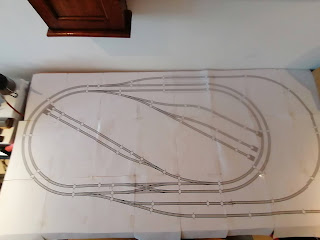 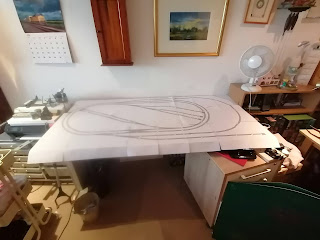 The right hand loop is designed to be elevated and there are two bridges across the back with a river running under that finishes in a lake. I have taken the opportunity to extend the right hand loop out by one straight. Valerie would like me to put a fun fair in there as I did with my original Marklin layout. Faller make some nice sets so that's in the plan. I have also added a spur out the front as an interchange track where I can insert trains and remove them.

As you can see from the list there are quite a few items needed so this isn't going to be cheap, especially as the scissors crossover is £52 on its own (plus the single Switch pilot and four of the three to two wire units!). Fortunately, Valerie's mum gave me some money and I have been selling off my Marklin stuff so I have the available funds - close to £350! Fortunately, I have the ECos controller and mobile hand set plus 3 locos and 20 odd freight cars. There are two changes that I might make. I might put the scissors crossover at the back which will cut down the reverse running on the double track for trains from the interchange track. In fact, as I have the funds, I might put an extra crossover there so that trains can move between the two tracks on either side of the layout.

The V3 set comes on Tuesday and I will set it up to test the track and to get the points working with my ECoS. If that works well, then I will buy the rest. Happy days!

That looks like a pretty cool layout. I hope to see Dom videos once it's running. Gotta give wives credit, they really do know us.