A bit of a problem and a small success

If you don't know, Peco electrofrog switches require that the frog polarity be set for each of the routes. This is done in the version as purchased by using the switch blades to route power to the frog so depending on which switch blade is touching a running rail, the frog gets one or other feed. Using DCC, this is a bit hit and miss so it is recommended that the links that make this happen be cut and the switch blades be connected electrically to their own running rail. This leaves the frog unpowered. Many people us relays etc. to manage this. I use what is called a Frog Juicer from Tam Valley. This is an electronic switch. If the polarity of the frog is set one way and the switch is set to the opposite that there will be a short as the lcl traverses the frog. The Frog Juicer senses this short in micro seconds and reverses the polity of the frog to the correct way round.

Sounds good. I have 5 switches set to one Frog Juicer and four switches connected to the other (each juicer manages up to 6 switches). One (the 5) works perfectly. The other causes a 1 - 2 second delay when operating! I have a suspicion that the one that is playing up is an older version that is incompatible with either my DCC controller - NCE - or with Peco switches. I have a video that shows the problem.


I have requests out to my DCC supplier, Model Railroad Hobbyist Magazine Forums and to Tam Valley. I will report back.

The success is this. I purchased 9 Accurail freight car kits which arrived on Friday. I have made the first one. It went together without any issues. I have, however, replaced the Accumate couplers with Kadee 148 replacements as I am having a bit of trouble with an coupler that isn't a Kadee. My plan is to replace any out as soon as I can. Here it is on the layout. (I have just noticed that one wheel is off the track!) 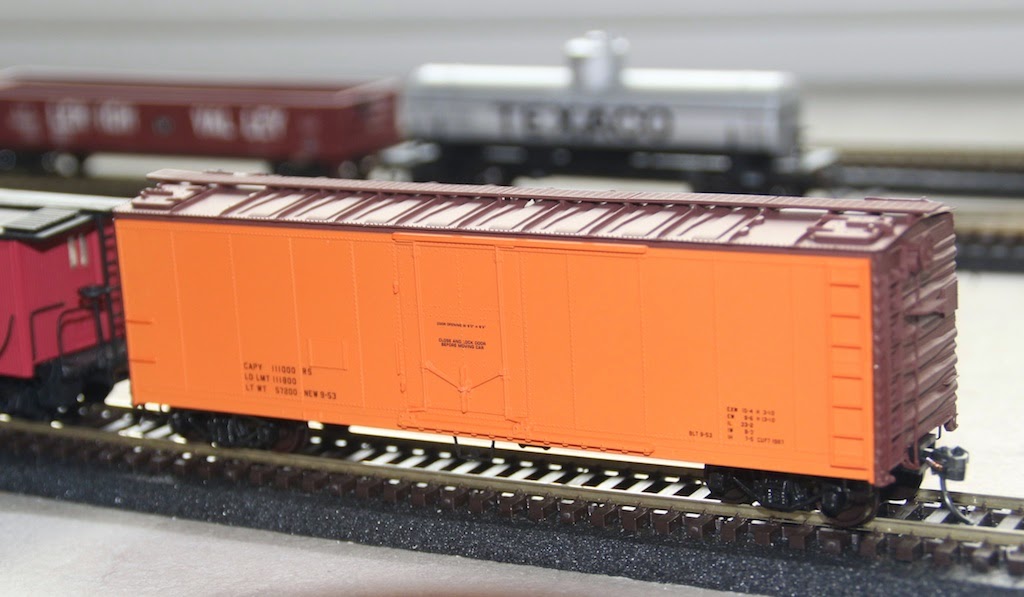