Sorting out the point display panel

As I have mentioned, I have a problem with arthritis which means that I cannot stand and work on the railroad if it is at certain heights. One of these heights happens to match the worktop in the hobby room. The construction of the railroad is intended to be as lightweight as possible so that I can move the individual boards into the living room so that I can work sitting down at the dining table.

The railroad is designed to be operated on the hobby room worktop with me sitting alongside. However, I cannot see how the points are set when sitting down. 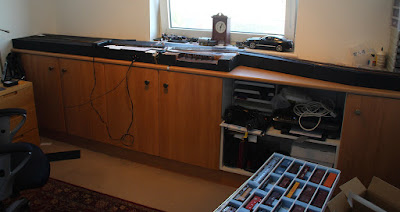 Part of the reason for me getting the Cobalt switch machines was to enable an easy way of indicating the routes. The secondary feed from each machine was to be used to drive a couple of LEDs. as described in the Cobalt documentation. I realised that I could make the display simpler if I used a bi-coloured LED rather than individual red and green LEDs. However, I have had experience before in soldering up complex layouts before and there is a great scope for shorts, especially when using D-Sub plugs and sockets as the connections are extremely close together. This meant that I would need to be very careful in the construction of the panel if I wanted this to be in any way robust in a layout that would be taken down and erected with regularity. I, also, wanted to be able to change the wiring very simply. The reason behind this was that the polarity of the points was different depending on which way the frog was set. Rather than have to work all this out, I decided to put everything through a breadboard. Firstly, this would alleviate much of the comoplex wiring and make it simple to reconfigure the LED connections.

The best way to manage the wiring was to make all of the connecting wires to a similar specification to the jumper wires that are used on breadboards. I have some tinned copper wire and lots of heat shrink. This is what each of the LEDs looked like once I had wired them up.

As you can see, all of the connections to the LED have been sealed within heatshrink. Also, I have soldered a small amount of tinned copper wire to the end of each lean (again with heatshrink around) to make an effective plug to go into the breadboard. Once all of the LEDs were finished, I was able to hook everything together. Each LED has one outer leg fed from one side of the DCC bus and the other leg to the opposite side of the bus. The centre pin is connected, via a 1k resistor, to the frog feed of the Cobalt machine. These connections are very simple with the breadboard. 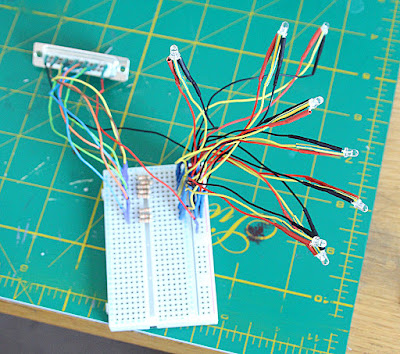 I was a bit hesitant about powering everything up as these things normally don't work first off and I didn't relish searching for the one dry joint! However, I needn't have worried. Putting the power in resulted in all of the switch machines carrying out their self centering action with every LED reacting to the changes. Finally, I made sure that I had each LED labelled up for its correct point.

I had already made a panel out of a sheet of printer paper that I had laminated and fitted to some foam core board with 2mm holes in the foam to accept each LED. However, I had punched holes in the paper. I realised, after reading on MRH about another LED panel, that the LEDs would shine through the white paper. This would make it much neater. Anyway, here is the final result. 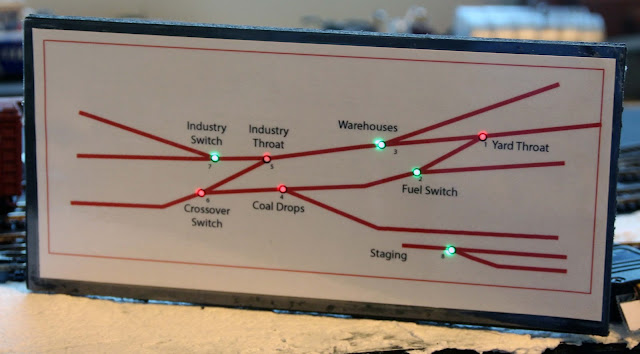 I can now sit on my moveable office chair, control the locos and the points from my iPad (using WiThrottle and JMRI) and see the routes as currently set - all without standing up. 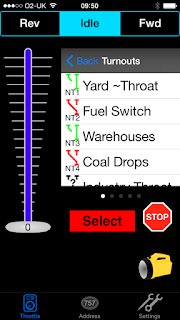 As you can see, I need to reconfigure some of the LEDs to match the point orientation. Then the LEDs will be the same as the WiThrottle indicators.