So, there was I, just idly chatting to my wife saying how much I like seeing trains pass each other and how this wasn't possible on my existing layout. "Well, take it down and start again" she said. This made some sense because of the way that the railway began.

I bought a Marklin train set and made some simple adjustments to the layout to fit onto my 2 x 1 metre space. I didn't give it much thought but now, looking at it, I can see the flaws. There were twin tracks where I could park one train whilst the other ran. I also put what has turned out to be a little used goods yard. What I realised that I wanted was a twin track run with a decent station for passenger trains and a small goods yard with a couple of factories rather than a three lane shunting yard with no need for that amount of wagons.

Out came Anyrail and I came up with the following. 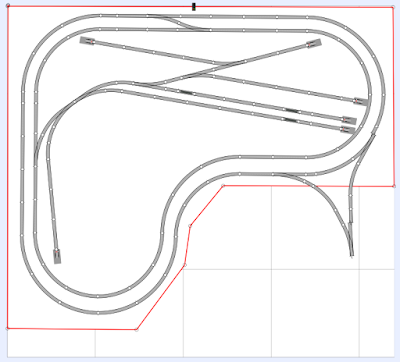 Valerie agreed to a small, 1m square addition to the layout, which would cover some of her dressing table - remember that as mother-in-law lives with us, I have lost my railway room and now reside down the end of our, admittedly large, bedroom. The red line denotes the edge of my board and the wye feeds out to my detachable shadow station.  We now have a double track, access to a main station from the inner loops. The main station (Pennstadt) has two nice long reception tracks. There is also a couple of goods sidings and space for my V60 to hide away. There is also a head shunt to so that operations in the station won't interfere with the outer tracks. Hence, in theory, I could have three trains in operation at the same time! One of my Marklin friends suggested that I add another crossover to let the outer line access the station but this isn't how I want it to work. I am trying to use German right hand running so the outer track is for anti-clockwise and the inner for clockwise operations. This is fine except for a little bit of reverse running for the trains accessing the inner track from the wye around the bottom part of the outer loop.

I now realise that this running only works if the inner run enters the station where, coming out, it can process to the outer loop via the crossover at the top. If a train just traverses the loop and wants to come back out, there is no way without reversing. As an example, my crocodile with some SBB hoppers would have no reason to enter the station so, if travelling on the inner loop, would have an issue. I am now putting a crossover in to the left of the wye using left hand points so any train can pass the station entrance and still get out to the wye.

On the first layout, I took my wife seriously - "DON'T use a computer to run the trains!" was her comment. This meant that I only powered the points at the back of the layout where they were hard to reach. On discussion, she agreed that she didn't mean that quite so I have now got an agreement to power all of the points. Little does she know that the layout on the JMRI screen will just become one of the ECOS!

The layout was torn down - foam core is very light and easy to break up. We live in an apartment block and have a large bin room in the basement so the remains were quickly disposed of.  Our local Hobbycraft sells top quality A1 foam core at £10 for 4 sheets so that was a cheap way to get the new boards built. I had a small annual pension pay out in September and mother-in-law gave me a small bonus so I had all the funds that I needed. I put the plan together and ran up a track parts list. Working out what I didn't have was easy - I am a bit of a spreadsheet buff - and off went the requirements to my friend Adrian, who always has lots to sell at good prices! He was able to fill my needs so I was able to start. Being retired, I can dedicate lots of whole days to my railway so it will all go together very quickly.

Next, I will cover the construction of the boards and the wiring.