The idea of the new layout was to provide for a double track main line with one station and access to storage. This involved negotiating a further 1 square meter from my wife. If fact, she was quite amenable to the whole thing and gave up a part of her dressing table top to make the plan work. It also involved moving her bedside cabinet under the railway so overall she was very kind.

The extra real-estate was required because the outside track had to be R2 sized and this would result in a lot less room if I was to go the route using only the 2 square metres that I had previously. As it happened, the top of the dressing table (or at least the small amount that I had garnered) was great for supporting the new extension. I will show how it all looks later in the blog.

I now had to come up with a plan to use the new space. There were a few druthers (as our friends in the USA call them); i.e. wants rather than constraints. My three main wants were


The double track would also allow for main line trains to traverse and leave without any problems.

The track plan was worked out using Anyrail 6. Not everything connected perfectly but the minor issues shown up by the software were easily sorted with a bit of wiggle in the real world.

My first plan, and one that I actually laid, was as follows: 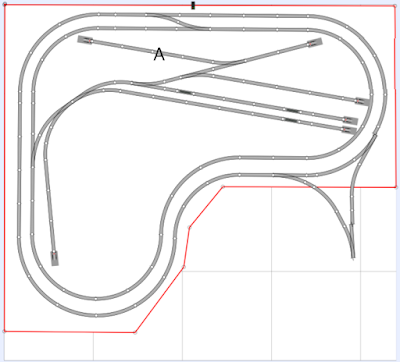 There were two things wrong with this. Firstly, at A, there was no way to get any wagons into here unless the delivery loco pushed them there. The local shunter would always be on the wrong end. Secondly, the third uncoupler at the front of the second main track of the station would never be used, so it was moved to the third incoming line. I did think about putting a release crossover in but the available track left would be very short, plus I didn't have a budget for two more digital points! 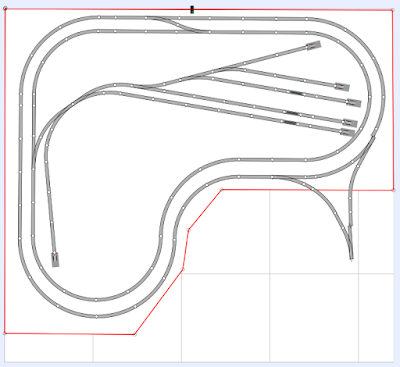 It now came to light, after running a few trains, that there was no way for a main line train with right hand running; i.e on the inside loop, to get back out to the wye to use the storage. This required a rethink. Fortunately, my friend Adrian - from whom I buy a lot of my Marklin stuff, came up with a  couple of points, motors and decoders so I could put a second crossover into the main line. 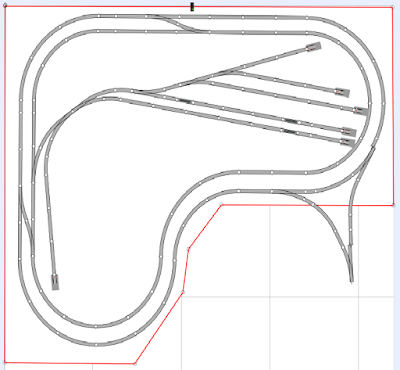 The above still shows the uncoupler in the wrong place but I sorted that as well. Now we have a layout where, using right hand running, there can be two trains on the main line and a shunter shunting in the yard. Admittedly, trains running on the inner track have to reverse run from the wye to the crossover at the rear. To avoid crashes, the crossover is protected by a colour light signal - the signal controls a dead section just in front of it so, when red, the track is dead. Additionally, any train that wants to leave the station must reverse run until they get back to that crossover.

It isn't perfect but it will let me run three types of train - main line leaving the wye to run clockwise; main line leaving the wye to go anti-clockwise and local trains leaving the wye to go to the station. I have had to create an extra name for the train routing. Pennstadt is clockwise, Valdorf is the station and, the new one, Hennersdorf is anti-clockwise. Pennstadt gets its name from our surname - Pennington; Valdorf from my wife's name - Valerie; Hennersdorf after my wife's favourite golden retriever, Henry (always known as Henners).

That's about all for now. Just note that the one square metre board is totally removable. Also, the main board can be rotated across the desk with the "dangling" end over the edge of the desk supported on two temporary legs. Thus, I can get to all parts of the layout whilst in my office chair - crucial given the state of my arthritis!

Finally, as promised, here are a couple of shots of the new extension. As you can see, it rests on the dressing table top. The basic support for the railway is an "electric" desk which supports the main board. This desk is 1600 x 800 in size and has an electric mechanism for raising and lowering the desk height. This was supplied to my by the Open University as part of their disability support when I was completing my B.Sc. This means that I can get the height of the desk to be exactly the same as the dressing table top. It makes everything nice and easy and very firm. 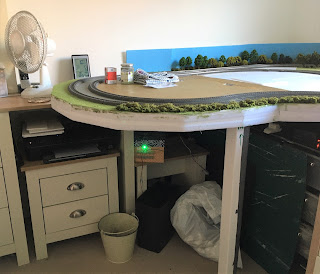 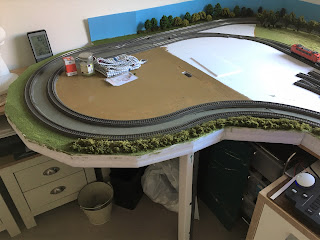 The separation line is along the demarcation between the brown and the white. The two holes in the top of the brown side are for power to the two fairground rides as the main open part of this board will be the fairground.