Lighting goes in with a new station

Now that some of the basic scenery is down, I can concentrate a bit on the details. First off, I had to install a station. There are to be two platforms in my station for Valdorf. I already had a couple of station buildings that I had made from previously obtained kits. One of them fitted in so that was my basis. However, it was only a building so I had to get some platforms for two types of train.

There are two passenger trains that are due to arrive in Valdorf. One is the push-pull train made up of the Marklin E141 with three Piko coaches - one of which is a cab unit. The second is a local train that is made up of some 4-wheeled coaches and a BR24. The E141 train is quite long as the three Piko coaches are full length. One of my platform  tracks was amply long enough for it and the other track fitted the BR24 nicely. The platforms were to come from Faller - kit 120105. I ordered one of these from my local hobby shop and soon got to work.

It turned out that the platform was too long for my situation. Plus it was very wide. The width was an issue as there is little room on the other side of the station tracks for a full width platform due to the goods arrival track being there. This has a couple of consequences. Firstly, I am going to have to narrow the other kit, when it comes and secondly, with a narrow kit there is no room for the subway entrance so I had to cut the subway out of the first kit as well. As I have alluded to it, the second kit has been ordered but not yet arrived. The first kit went together very nicely. I painted it to mask all the glue marks. MEK is a very efficient glue and doesn't affect the surrounding surfaces but does leave a bit of a shine. The platforms got painted in my new Marklin track colour and the roof got a couple of coats of Neutral Grey but not enough to make it looks perfect.

Lighting! I am a big fan of lighting as my wife likes the effect give by the railway in the bedroom when she goes to bed at night. We leave the railway on whilst we read our books before laying down. Couldn't be better. I ran a couple of dark wires up the supports of the roof - brown and black and then painted them the base gray. The wires power a few LEDs cut from a long strip. Each is wired apart from the next to give a good spread of light. Then I added a couple of LED street lights to the end of the platform. Lastly, I fished out one of my packs of cheap figures bought off EBay. You get 100 figures for £3.89. They are not brilliantly painted but, en-mass, they look the part. I put a lot of them on the platform and, when lit up, it looks very good to my eyes. 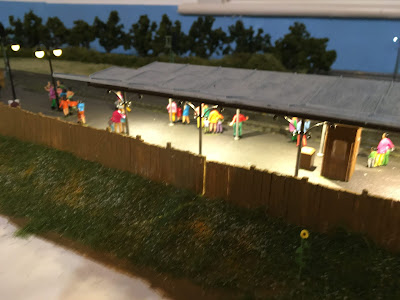 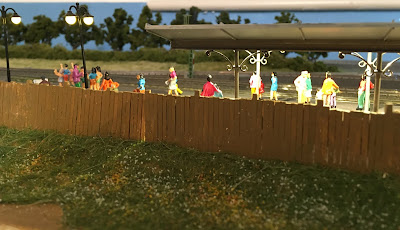 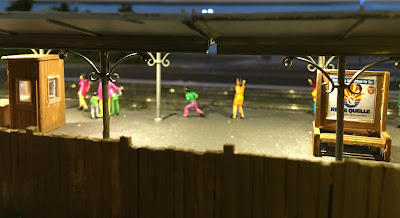 Wiring everything up was very easy because of the the 5V power bus that I installed under the board at the beginning. Every light has a pair of connectors close by. I moved on to put the goods shed in. This was built for the the previous layout and fitted in very nicely. It also has an LED strip installed. Next, I fished out the LED street lights that, again, were from the previous layout. These were bought from Amazon at around £6 for 10 per style. I have some standard two light street units plus some high level station yard lights.

I needed somewhere for unloading oil wagons from the local goods train. Vollmer had a nice little unit - their 45527 kit.

Lastly, I wanted to put a couple of signals in to add some more technical interest. Knowing nothing about German signalling, I just pushed ahead! I got hold of a couple of Veissmann 4011 colour lights. I was told that they should be ground signals but, if I did that, they would be hidden by the trains so I went for the normal ones. I am running these off my ECOS through an ESU SwitchPIlot. 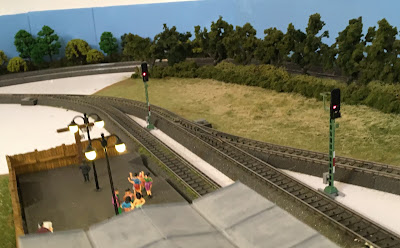 They are "hand" changed as desired. I did think about making them automatic but that would take some of the fun out. I have subsequently found out that I should have red/green-amber signals because of the point work following the signal. This is to indicate to the driver that he is to take care! I will see what I can do when my budget recovers from the recent bout of purchases.

I am working on the station car park for my next project. I also have some Wills coal yard kits and a Kibri signal box on the way so plenty to get on with.