We are very lucky here in Ipswich - well fans of DCC anyway. Close by to me and, in fact, just around the corner from my daughter's house, lives the guy who runs Coastal DCC - Kevin Dickerson. He stocks a lot of what you need - and want (not always the same thing). Be that as it may, he certainly stocks Digitrax, which is my manufacturer of choice for DCC nowadays. I used to 'swear' by ZTC but there is too much history there for me to continue with it so it all went on E-Bay ready for the new beginning.

I have purchased a Digitrax Zephyr Xtra which is described here. The best bit was that I could pop around in the car and pick it up.

It has a similar layout to the ZTC controllers - a decent lever for the speed - a nice reversing and brake lever plus all the buttons for controlling the functions etc. Mind you this controller goes up to function 29 - not something that ZTC can do, although I believe that Neil is working on that.

Here is a picture of it out of the box. More as I go along and learn to use it. 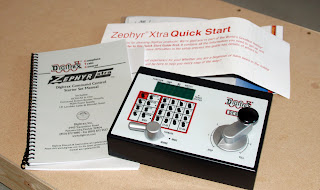