The Cobalt switch motors are very flexible. They can operate on DC or DCC, change the polarity of the frog, power LEDs to show the road selected and interface with switches or other devices. I only need  the basic switch operation, the frog switching and the LED management.

As I have never used them before, I thought I would put up a test rig. Here it is with the switch in place. I knocked it together from some scrap foam board so that it was installed in the same environment as the final layout.

The track is held down on double sided carpet tape and alignment is fixed by the use of a few small pins through the ties. On the real layout, everything will be firmed up when the ballast is laid.

OK, so we switch to the underneath now. 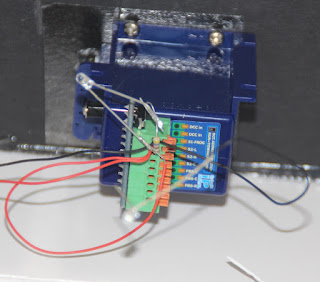 This is the Cobalt motor in place. It is held there using the same double sided tape as for the track. In the final installation, of course, I will be using the DCC Concepts supplied double sided pad which is a lot stickier.As you can see, there are two wires (red and black) going to the track. These provide the power for the motor.There is also a resistor installed in the frog polarity control. This is connected to two LED (one reversed vis-a-vis the other) and one leg of each LED is connected to the track feed.

I have set the accessory number for the switch. This is easily done. You just move the little on-board switch to the Set position and use your DCC controller to address the switch - I used Accessory 1 for this test. It gets the command and sets the address. From then, you put the switch back to Run and you are done. I now have a test switch that is operated by my NCE controller and gives me a LED indication of which road is set.

You might notice that both LEDs are white - I don't have any other colours so I have some red and green ones coming. This is going to be fun!
Posted by Long Haired David at 07:02