As part of the shop operations, we became a Bachmann agent but only selling their Dynamis range of DCC hardware. When we eventually came out of the DCC market, we were left with two Dynamis units that had failed. We asked the rep if we could get them fixed but were surprised (and pleased) to get a full refund. This left us with a balance on our account and no real reason to use it. We still get the Bachmann stock lists each week and I noticed that they were just about to release a DCC fitted N-scale GE 44 Tonner in New Haven colours. So I came up with an idea.

"As it is cold in shed", I said to my wife, "Why don't I make a small N-Scale layout that will rest on the kitchen table?". "So you can do that while I do my Latch Hook" was the reply - so off I went.

I ordered a wodge of stuff from Bachmann up to the credit note figure, which got me 2 of the GE 44 tonners, a quantity of freight cars and a couple of other bits. Then the Express bit kicked in.

Monday - I went down to Scograil - my local model railway shop - and bought some track. then off to the wood yard for some 2" x 1". That afternoon, I used up some spare Sundeala board and had the baseboard made.
Tuesday - nothing done because it was the Ipswich Model Club Meeting.
Wednesday - I laid all the track that I had - I now need some more!
Thursday - I wired up the track for DCC (I am using a spare Lenz Compact as a controller).
Friday - I have trains running.

Not bad going! Here as some snaps. 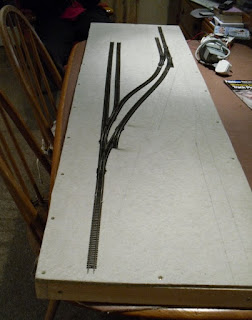 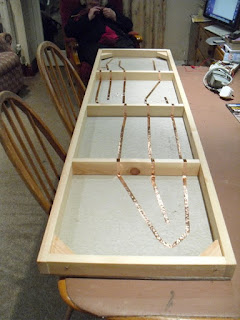 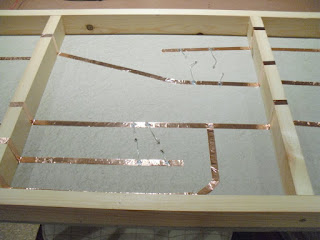 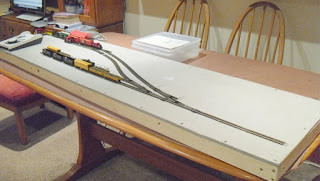 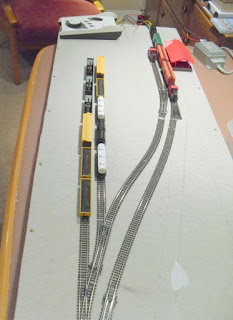 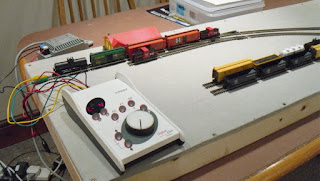 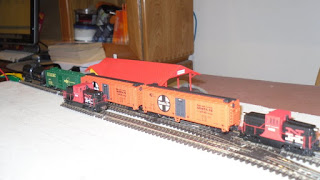 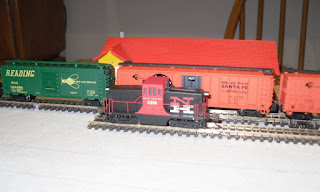 The underside shows the power bus - made from copper tape. You just run droppers down from the track and hook onto the bus. The droppers are all tinned copper wire so it's all nice and easy.

Finally got the turntable working

After many attempts at getting power to the track, I finally stripped the whole thing down this week. I put a lot into making sure that everything was right. I threw the Walthers track base away by cutting it out from the two sides of the deck. I then made a new deck out of 30 thou styrene so that I could lay some standard track down. The previous attempt at laying individual rails using superglue was rubbish. At least this way I know that the track is going to stay in alignment.

After putting it all back together again, I still found that I couldn't get power to the track properly and decided that the brass fingers pressing against the two brass collars on the pivot just didn't have enough pressure. I discussed with a friend (Dan) the option of just 'sledgehammering' it by using direct wire connections into a connector block. That way, every session, I could unwind the wires. He suggested using some springs as they do in slot cars. I didn't fancy the work so what I did was to solder a wire from each finger around the collar so that the finger couldn't lose contact.

At last I have something that works - not every time, but if it fails, it seems I just have to do one more round trip and it all sorts itself out.

Don't forget that the whole layout is DCC, so the turning motion is controlled by a DCC chip addressed at 99. I have set the CV for maximum speed right down so the fastest speed you see here is with the controller full on. This also gives me tremendous slow speed control - I can move it by about 1/16th of an inch very easily. I do have a DCC booster that can control the polarity change as the turntable turns automatically but I don't have a suitable cable. Hence, I have resorted to a DPDT switch which I flip with every turn. Fortunately the DCC controller overload protection is excellent so no damage occurs if I get this bit wrong. I will get it controlled properly but I need to get a cable, which is proving difficult at the moment.


Here is the exciting video.


Posted by Long Haired David at 11:21 No comments: