The hills are alive with the sound locos!

Well, with four locos that have sound fitted, it can get a bit noisy. Actually, running is on hold until I get the last of the track, which should arrive tomorrow. Once that is here, I can finalise the fiddle yard and then start panning the traffic, etc. I am beginning to think about a little web program that I can run on a browser to organise the traffic. Valerie is raising her eyebrows saying "I thought that you weren't going to get the computer involved" but I can't see a better way to do it.

Here is where we are at the moment. The hillside over the tunnel is pretty much finished except for forestation. I need to buy a small supply of miniature trees - they give the impression of distance - but that will have to wait until my next budget run - early March! I have managed to get the cows in, which Valerie likes. However, I am planning to put a Faller fairground in that area so we shall see how it all ends up.

I have made up some trays for the freight wagons. There are actually two trays so far. 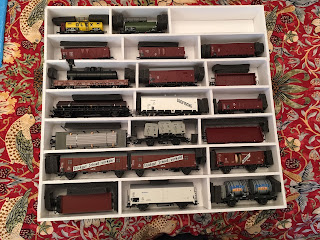 Firstly, an update on the previous post. The Lenovo laptop didn't work out. We now have a very good Dell laptop. Mind you, it was very slow until I replaced the 4GB of memory with 16GB and also took out the hard disk and put an SSD in. Now it roars along. Secondly, I did build the baseboard out of foam core but strengthened the underneath with a sandwich of 3 layers and beams rather than box sections.

I now have the baseboard finished and the track laid. I was very lucky as I mentioned on the Märklin forum that I was planning to buy all of the track and had an offer from a local chap. This offer was for a mix of new and used track and was generally around half price. I now have the layout down but I found that the board was a bit too deep to reach over easily. I have had to disobey my wife's request that it all be run manually as I have installed point motors and digital controllers in the points on the far side of the board.

It got even better as,  when I mentioned that I was going to extend the rolling stock with some purchases from Germany, my new friend who sold me the track made me an offer of two locos, 6 coaches and a pile of freight wagons, all at exceedingly good prices. I also picked up some local coaches and a collection of freight cars from my local hobby shop (LHS) Scograil. He doesn't sell Märklin but Roco cars work perfectly fine. As a result I now have four locos (or Loks as I am learning to call them), six mainline coaches (Rheingold express), four locos, four 4-wheel, coaches, around 20 freight cars and a few kits for stations and so on. More than enough to be getting on with.

First off, a panoramic view of the layout: 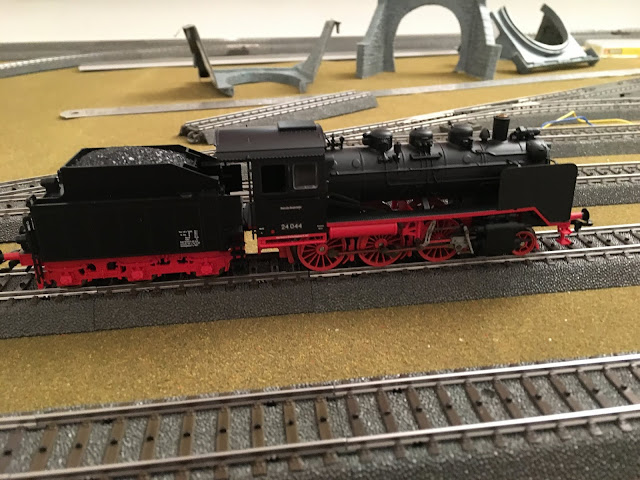 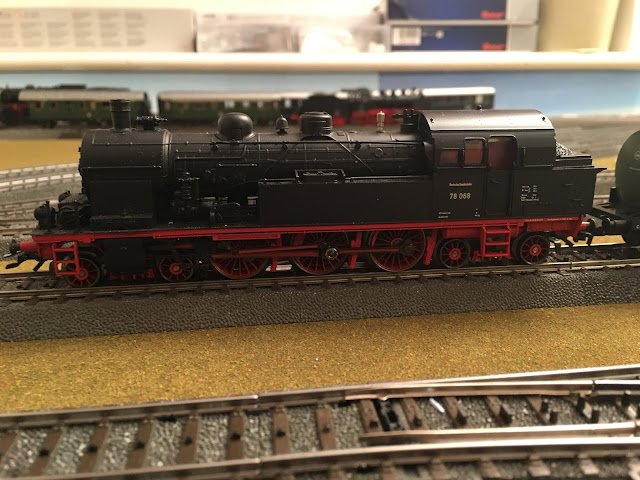 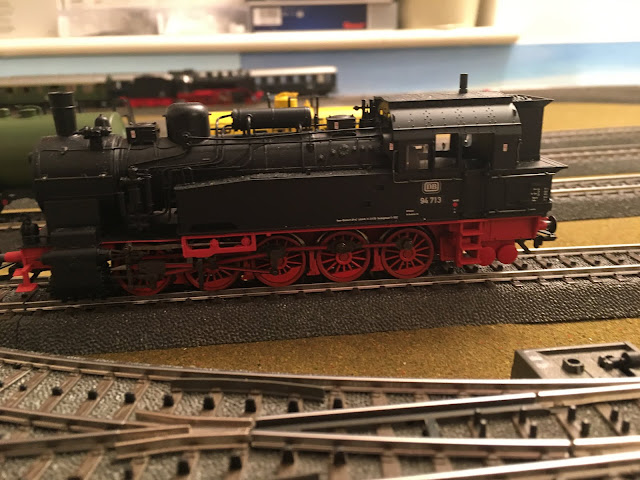 Class 23 Train and Class 24 (in the background)

(with only 2 out of the 6 Rheingold coaches)

The box below, with the lights, is the control box for the uncoupling tracks.

I have to complete the tunnel and scenery around it. I have kits for two stations that need to be made so that I can think about the rest of the towns can be created. I need to get some freight wagons onto the layout to get a better idea of how traffic could be run. Once I get the last point motor, I will be able to create the "fiddle yard" - or "staging" off the right hand end of the layout. Once this has been done, I  will be able to think about the total traffic flow. I can't wait!


Posted by Long Haired David at 12:06 No comments: