This blog has covered all of my model railway and model railroad activity since August 2009 and, now that I am permanently committed to British N Gauge, it is time to bring it to a halt.

I am starting a new blog that covers my move to N Gauge.

Before you go, thank you for reading this blog.I hope that follow me and read the new one.

Posted by Long Haired David at 11:04 No comments:

A frustrating two days but we got there

Pennvale Sands moves on. I laid all of the track for the main station, wired it all up and started to test the trains but a few issues cropped up.

Firstly, the Ivatt 2-6-0 that I bought just wasn't going to run correctly. Having had all the trouble with the DCC Concepts decoder and thinking that it was all solved with the new Zimo it turned out that, on the Digitrax speed scale of 0 - 100, it would only run smoothly from 38 onwards. Below that it had a hesitancy which wasn't too obvious until there were a couple of coaches behind it. It was then clear that they were closing up and pulling apart on every turn of the driving wheels.

Secondly, the 0-6-0 Jinty 3F that I was planning on using as a station pilot was only promised by Bachmann "this year" with no indication when. I decided that I would use the Fowler 4F as the pilot (more on that later) and get another loco to run the freight. I wanted a Black Five but my local hobby shop - Orwell Model Railways - didn't have one in stock so I picked a 4MT 2-6-0 instead. Wrong! This is a tender driven loco. In fact, it was so tender driven that the main driving wheels didn't rotate most of the time.

I had one of those nights where you lay in bed and think of all the nice ways you can say to the decent pair at Orwell MS (Kevin and Brett are both top notch people) that you don't want these any more. I was at the door at 10am the next day hoping that I could be casual about this. However, I needn't of worried. I gave them to Brett and explained that I didn't want to have steam any more as I couldn't go through any more of this and he wholeheartedly agreed with me and asked what I wanted to do. Well, I had a little list on my phone:

Well, it turned out that he had both in stock. I even got given two new decoders in place of my old ones. There's service for you. These two run like a dream.

That got my running problems sorted. So what else when wrong?

I laid all of the track and installed all of the Cobalt IP point motors and, guess what, I got some of the wiring the wrong way round. It is never explained in any documentation that the feed to the point motor is different depending upon which way round that the point is oriented. My red and black wires feed go into socket 1 and 2 on the motor. That is if the point tail is pointing left. If it is pointing right, the feed has to be swapped, otherwise you get a short when the loco touches the frog. It is all sorted now and all thirteen points work as expected.  The last thing that I had to do was to wire up each frog with a long, yellow wire, so that I can fit up an LED display above the back scene - eventually.

Here are a few images that show where I am with the work. Firstly, here is a close up of the LED feeds. 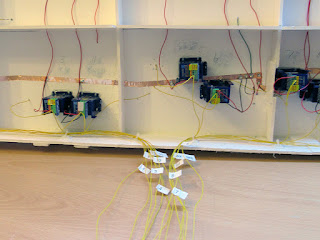 This following shot is of the overall main board where you can see the foam core construction and all the wiring. (Don't forget that you can click on any image to see a larger slide show) 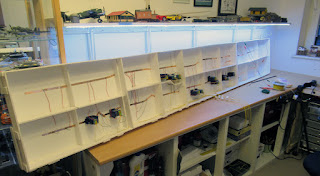 Lastly, here is a shot with the two new diesel locos in situ along with the Metcalfe Goods Shed and the back scene.

I have picked up an 08 shunter and a tiny CT Electronik decoder so the next job is to get that installed and running.  There is a story behind that as well! Come back soon!

Posted by Long Haired David at 12:11 No comments: