The core of the project is the random engine.

The complexity is actually from the routing issues:

Determine the next train


The other interesting thing is that some cars have a complex routing requirement. let us take an example from the Pacific Fruit Express (PFE) back then when they used refrigerator cars that were chilled with block ice.  Let us say that the PFE storage yard is somewhere north of Los Angeles, CA. It might go as follows:
This is further complicated because these three fictitious fruit packers send their fruit to different destinations

Initially, train length is determind by the number of cars that shuld be routed - taking into consideration that each and every industry has a frequency of cars attached. This means that it is possible for a train that is allocated a length of 10 cars may only be allocated 2 or 15. below the defined train limit, there is no issue but if the number is above then the randomiser will allocate cars to be dropped.

However, the ultimate limit is set by the train length. This, in itself, is set by a few factors - the power of the loco, the weight of each car and also, because it may meet other trains en-route (most US railroads are single track), the length of a siding that it can get into to get out of the way. The power of the loco isn't that important as you can always connect a second (or even third or fourth) loco. It is the siding length that is the ultimate limiter consequently, the maximum train length is one of the attributes of the train itself. This may differ by train type. If the train is a local/way freight then the limit is the shortest siding at locations along the route. If it is a through freight then the limit would be any siding on the main line. Passing sidings are not necessarily at a town or industry along the route but just may be on the main line for efficiency's sake.

In American terminology what we in the UK call a siding as named a "spur". A siding, in US terminology, is a length of track parallel (usually)to the main track and connected at each end by a point (US - switch). This provides a "hole" for one train to go into thus getting out of the way of a, second, oncoming train. This is not something that we see often in the UK as very little of our routes (apart from a few branch lines) are single track.
This will be a fun bit of code to plan and implement.
Posted by Long Haired David at 08:29 1 comment:

I am signed up for TM470 - The Computing and IT project. This starts in January but before then I have to have a proposal for a project which will take 30 weeks to carry out and result in a 10,000 word report. It must be associated with at least one of the Level 3 (Honours level) course that have been followed and it has to be technology related. I spent some time a couple of years ago working on an idea for a freight car routing system. I managed to get a very thin prototype working which had the following constraints:

It did, however, prove that the idea was feasible. Now, I have to take it to a new level of operation. Well, in fact, I only have to design the project and report on the design. It would be good to have a prototype of the tablet front end and of the routing generator (which is the most complex part of the project). I can't get away with stating that I know that there are other issues that affect car selection and routing as I will be expected to have carried out a thorough analysis of the issues and choices which should be reflected in the design. Anyway, here is what I proposed along with a second post that expanded on the problem domain. Please note that this is written for an audience that a) doesn't know anything about railways and probably isn't interested and b) is based in the UK so doesn't know anything about US railroads - including the terminology that is obvious to us. The background description is purposefully brief so please ignore any obvious "facts" that have been missed.

US manufacturers etc. are traditionally connected to a “railroad” by local sidings similar to container shipment delivery by road, now. Individual US industries, within towns/cities would be connected to the railroad by their own siding (maybe shared with others) and receiving/sending goods by “freight car”. These sidings would be sited within two “Division” yards. The railroad runs “Way Freights”  between Division yards that are given lists of cars to deliver from the main freight yard to various industries and collect cars from those industries when ready. Freight cars are sourced from other industries on the same railroad or from other railroad systems by an “interchange”.
Additionally, there will be freight trains that move cars between division points. The software will also have to provide for the make up of these.
The proposed system would hold a schedule of all trains and be able to prompt for the next train to be run against that schedule. The railroad will, possibly, run passenger trains within its schedule (even if managed by an outside agency such as Amtrak). The system should allow for these

Project to be an Object Oriented software solution providing

REST back end server – “Smalltalk/Seaside” based (my in-depth language)

Deliverable to be design and implementation plan ready for coding.

Railroad – US name for a railwayFreight Car – US name for a railway goods wagonDivision – One part of a railroad. Railroads normally comprise of a number of divisions – normally crew and/or engine change points.Way Freight – A Goods train that comprises wagons for delivery at various industry locations along a part of the railroad between home depots. It also collects wagons that have been processed – either loaded or empty – loaded for onward delivery – empty for return to the goods yard.Interchange – A point on a railroad where two companies connect and thus can exchange freight cars for onward delivery – either to a location within the accepting railroad or for onward transmission to a ”foreign” road.Foreign – US railroads are all privately owned. There are approximately 700 railroads, all of which connect to one or more other roads. A foreign road is any other road than the one currently holding a “car”.Car – short name for any railroad rolling stock – hence freight car – passenger car, etc.

As some misunderstood what the central problem was, I expanded on the routing generator as follows:

The complexity is actually from the routing issues:
and so on...
It really doesn't matter if there are 5, 10, or 50 possible locations as the limit is set by the train length.
This, in itself, is set by a few factors - the power of the loco, the weight of each car and also, because it may meet other trains en-route (most US railroads are single track), the length of a siding that it can get into to get out of the way. The power of the loco isn't that important as you can always connect a second (or even third or fourth) loco. It is the siding length that is the ultimate limiter.
The smart part of the router will be coping with a possibly large number of cars in the pool. I have some statistics that show 250 cars available for use on a model railroad!
I will keep you informed as this progresses.

Posted by Long Haired David at 09:42 No comments:

We are seeing some action at last. I bought a great spray can from the local Hobbycraft shop. I used this to put a better base colour down. I then did some more work with plaster - and some more paint. I bought a Woodlands Scenics (WS) sprayer and scenic glue. This glue is pre-thinned and contains a wetting agent so it works straight out of the bottle. I know that I could dilute some PVA and add Fairy Liquid (as advised on the MRH forum) but I only have a small railroad and this is very convenient.

I popped into Scograil (our local model railway shop) to get a bottle of WS Fine Grass. Shaking this on and spraying the glue worked perfectly. Out came the trees that I have had stored away for about 5 years and I ended up with something that I am pleased about. 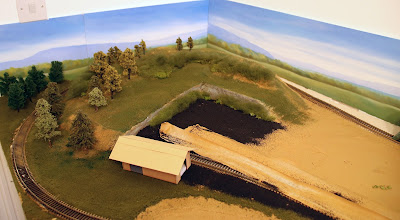 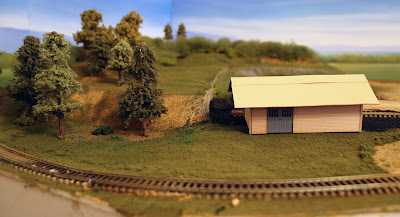 The unfinished building is a Carolina Craftsman Kit - Grizz's Hidden Gems. Not sure what type of industry it is going to be. I am going to make a stone base for it to get it up to rail level. It is an interesting kit. As the cover page says - "Our ZIP-Kits include limited instructions). Limited is the word. Lots of wood strips and nothing to show how to put it together. So, what you get is some laser cut walls, some Tichy Train windows and doors plus some corrugated material for the roof. Apart from that, you are on your own!

The trees on the outside of the track provide nice cover for the curve round the back of the hill. I intend to make a post and rail fence along the front of the hill, overlooking the rail yard, and put some cows grazing there.

I am in the process of putting down some ballast. I bought one of these ballast layers - my one is by a company called"Proses", in Turkey, but it is the same one that Bachmann sell. My ballast is quite fine and it shoots out so I am putting as much effort into doing it as I would if I was just shaking it out directly. 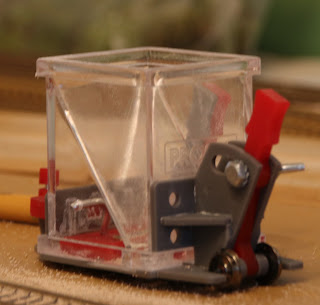 The ballast is mixed 1:7 with DeLuxe Materials Ballast Magic. This comes with a little spray gun which you fill with water and some washing up liquid. Lay the ballast down and spray it. Job done! 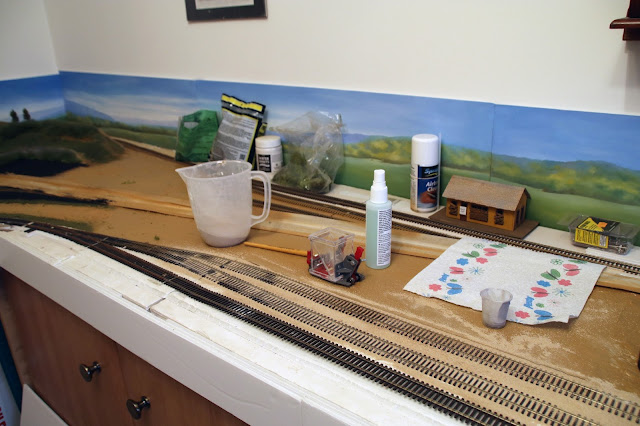 I am amazed that I am getting on with it so well.

I am starting a new Open University course in January. It is a ICT project course that requires me to build a project and make a final report. Seems easy but first you have to have a project that can take 30 weeks to build up to a 10,000 word report! I have decided to expand on my car routing prototype. I will post up the proposal in my next blog entry.

Posted by Long Haired David at 08:59 No comments: