I am trying to move forward in a controlled way. Rather than just doing one thing, I am spreading my time around to get a few things done in a longer time. This means that I am building station buildings, making scenery, completing the track plan and extending the capabilities. \one at a time\;

Over the last few weeks, I have picked up a couple of building kits - one from Kibri and one from Auhagen. The Kibri one is actually a Swiss example but it was on sale at a good price from my local hobby shop (Scograil in Ipswich). The interesting thing was that it stated that it came with lighting. Well, more of that later! The other building was added onto an order from Lippe Modelbahn in Germany as an add-on to an order. They were both nice kits to make but not up to the standard of the model aircraft or cars kits that I normally make. Instructions were fairly sparse. Working on the basis that I am building a "train set", I built them out of the box, using the fact that they are pre-coloured plastic to avoid doing any painting. Valerie liked the Auhagen kit as it comes with flowers for the window boxes!

They went together OK but there are no alignment pins or such so you have to be a bit carefult. The KIbri kit was a bit of a cheat in that there were 12 light boxes to fit around the windows but only one LED! It seems that you need to buy a set of Veissmann LED fittings to make it fully lit.

Firstly, here is the Auhagen kit made up. 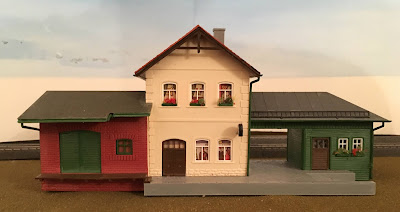 This had nice little appropriate printed sheets to fill in the windows.

Secondly, here is the Kibri kit. 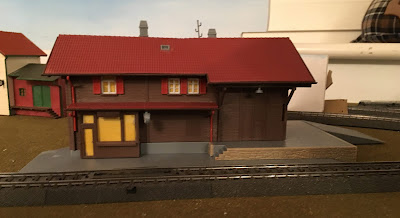 The images provided for the windows were completely inappropriate so I printed up a sheet of light yellow and filled the windows that way. As there was only one LED fitting, I decided to make my own. 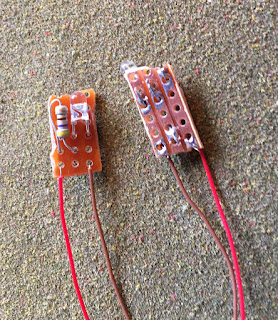 I made up twelve of these to shine through the windows. They are all connected to a Marklin 72730 switch box (kindly provided by my Marklin friend, Adrian). In fact, I am so pleased that I am buying some street lights to complete the scenes as the switch box will manage four blocks of lights.

To avoid both ends looking like a toy train, I decided to have one end encased in a tunnel. First off, I built an enclosed tunnel from 5mm foam core. I then fronted it with some sheets of polystyrene foam which I carved with a hot wire. The top was filled in with crumpled Amazon brown paper(!) and covered with plaster bandage. Then the whole shebang was coated with a thin coat of Hydrocal. Lots of various greys and white has resulted in a nice rock face. I have some mountain climbers to add to this sometime! I then dragged out my trusty box of trees that have graced lots of my railways over the last few years plus a few built from a Woodland Scenics kit. I don't think it looks half bad. It nicely mutes the sound of the train (and the whistle) as it goes through.

There is a nice painted backscene to go behind this but, after being taken from my old railway, it needed some careful touching up by my tame(!) artist, Mark. He paints in oils so it needed a few days to dry so that will appear in the next article.

There is an extension to the main board that fits between it and the wardrobe. This extension has three legs (one folding). This extension will become the "fiddle yard" or staging area.  I will be putting the extension up next week so I will take some photos then. In the meantime, this is final track plan, as drawn in SCARM. 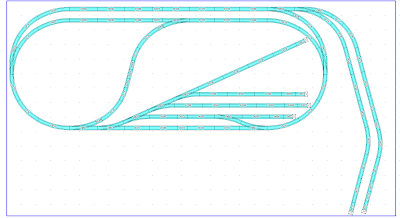 All of the points that are on the back of the board are controlled by DCC/Electric set ups. Again, more of that later.

I have learned to call my locos 'loks' in the German manner. I now have four locos. Here are three of them.

These are a Class 94, Class 23 and Class 24. I love the red contrast against the black. I have one more loco - a Class 78 but the decoder has failed so it is off being repaired!

I have quite a good collection of rolling stock, including a fabulous Rheingold set of 6 passenger coaches. However, I don't like keep taking them out and putting them back into their boxes so I have built a nice double decker carry tray out of my trusty 5mm foam core. 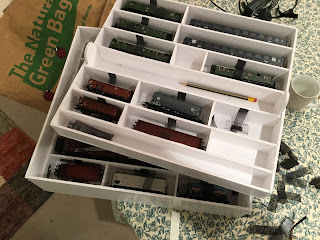 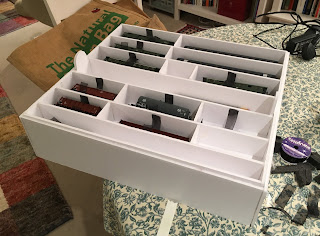 The black strips of ribbon help in getting the items out of their boxes.

Photos of the extension board, another new loco, a working signal and street lights plus a new controller! I can't wait.

Posted by Long Haired David at 14:05 No comments: