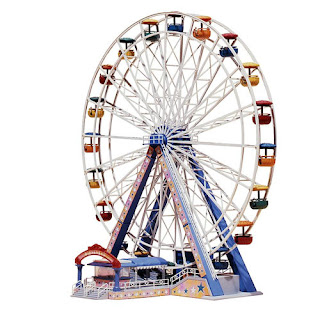 However, it doesn't end there. As stated on the Gaugemaster web site - " The ferris wheel lighting set 180635 is required once and the replacement bulb set 180636 is required twice for complete lighting of all gondolas." It doesn't even end there as you need a 16VAC power supply. Costs? The power supply is £17.95 from Gaugemaster. Next, to save a bit of money, I went to Modelbahnshop Lippe - who are my goto Marklin suppliers in Germany. The list is as follows:

The kits comprises 267 parts and is well moulded. If have built someFaller kits in the past and this is pretty much the same. Accurately moulded and nice to put together but the instructions are very complex and difficult to follow. They should be easy but I don't find them so.

Anyway, onto the build. First off, I tackled the gondolas. These have two fiddly little gates and a guard rail. Fortunately, my Methyl-Ethyl-Ketone -  MEK makes easy work of gluing these on - except, of course, some fell off later! 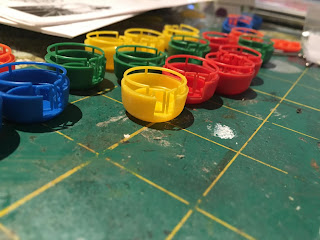 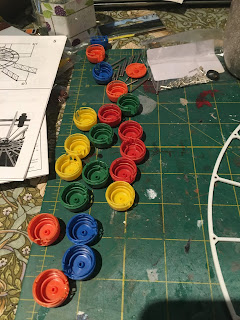 The next step was to construct the wheel. So that the gondolas can get some power, there are little brass collars that need to be inserted into each gondola location. Each side of the wheel then has some fuse wire to be applied. This is wound around each of the collars all the way around the wheel. What is obvious, but not stated, is that the wire must then be run down one of the struts and caught in the pivot by the supplied brass axle. Once this is done, the two wheel halves can be glued together. 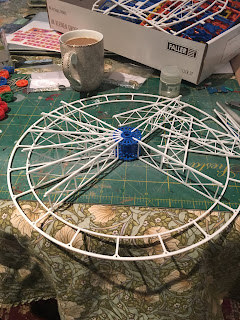 The gondola umbrellas are then built up - the two legs of each light are fed through two previously glued pivots and the wires are then trapped by metal pins. These pins then form the supports for the gondola and act as pathways for the power to get to the bulbs. 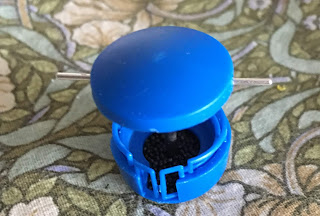 This all sounds well and good but it didn't work for me. I found that the connection between the wheel and the gondolas was extremely flaky resulting in a lot of switching on and off in a random fashion as the wheel rotated. I asked for some advice on the Marklin forum but all that came back was to make sure that the gondolas were adequately weighted (I had found that out) and that the connections were secure - which I could never achieve.

Pretty soon after, some of the bulbs failed which left some of the gondolas in the dark. I was left with having to buy some expensive Faller replacement bulbs or think again. As there were now too few bulbs for the gondolas, I had to think again. I stripped all the lights out of the gondolas and then fixed two circles of wire around the wheel - one out at 110mm and another at 95mm. I can then wire the resulting bulbs between the wires to create a light show.

The next step was to set up the Arduino to manage the wheel and the light show. The idea was that the wheel would turn for two minutes with a flashing light show. It would then change to a mode for the stopping and starting. This means running for 4.62 seconds and then stopping for 2 seconds. This would simulate the gondolas stopping for the riders to get off. This would happen for 20 events and then it will start running again.

This is how it all went together. 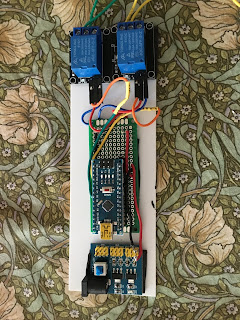 From top to bottom - two relays - one to stop and start the wheel and one to stop and start the lights.
In the middle is the Arduino Nano - this  controls the relays and provides the 5V for the replay power.
The item at the bottom is a cheap voltage converter "buck" from Amazon. It accepts 12V IN and provides three outputs for each of 12V, 5V and 3.3V.

The ride motor is 16VAC whist the Arduino runs on 5VDC. I have a Gaugemaster 16V wall wart and a 12V 5a ps that is already in use for the other ride. The Gaugemaster one would drive the wheel and the lights whilst the 12V would be reduced to 5V using the buck. As the 12V is buried under the baseboard, I powered the Arduino from a 9V PP9 battery. The problem was that both the Gaugemaster unit and the PP9 had the same sized barrel connectors. During one of my trials, I managed to plus the 16V into the 5V socket. A nice pillar of smoke  rose from the buck so that was one of them plus an Arduino that were trashed! Fortunately, the buck comes in a pack of four, whilst the Arduino Nanos come in packs of 3.

Finally, as there were so few working bulbs, I decided to buy some replacement grain of wheat (GOW) bulbs from Railway Scenics. These are 12V bulbs that, it turns out, that they can't manage 16VAC. A couple instantly burnt out.  This means a reworking of the power so that the relay controls a 5V feed.

Where am I now? Well, I have replaced all of the bulbs and wired up the system for the new configuration. Unfortunately, it is now on hold as my wife has suggested that I rethink the whole Marklin layout and, maybe, start again from scratch. The theory goes that - as I didn't know anything about Marklin back in January - I could make a better job by starting again! I had already been thinking that I wanted to be able to run two trains at the same time rather than only one.


Posted by Long Haired David at 12:08 No comments: