I put my track design on theModel Railroader Track forum for comments and had lots of help sorting out what would work and what wouldn't. There were concerns that I had done the usual trick of overestimating how much track that can be got onto a board and one commenter thought that I had used #2 turnouts to make everything work. In fact I had been a little ambitious but, with a bit of reorganising,I was able to get the basic layout to fit.

This is the "current" final layout. 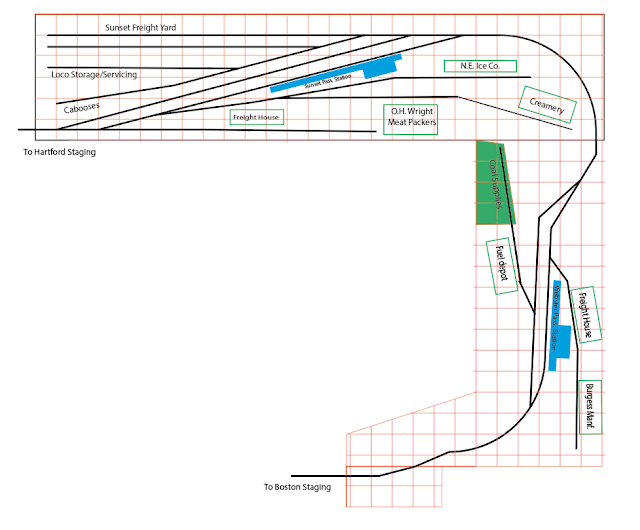 I had to swing the runaround over so that it ran from one end of the main board to the other. To make this work,I had to move the passenger station onto the runaround. I also removed a couple of industries. Apart from that everything went in OK. here are some pictures as it went along. 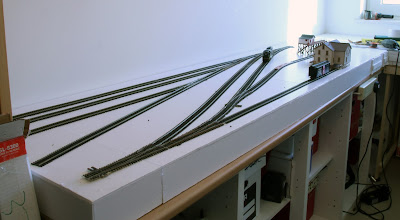 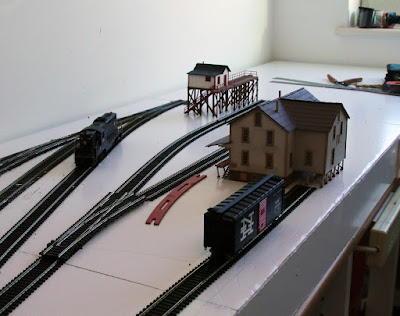 The track is now down, wired up, had the turnout motors fitted and everything has been tested. 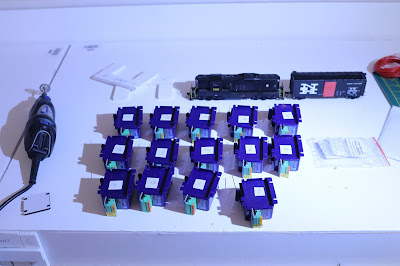 Here are all of the point motors laid out and pre-configured to their correct addresses. Little did I know what was to come!

It wasn't until I tried everything on the board that I realised that motor No. 1 didn't work. I had done the classic Cobalt motor stupid error - put the two power wires in at the wrong end of the wiring panel. This is guaranteed to blow up a motor. Later versions have a little film cover to stop you. This is the second time that I have done this. So, a quick trip down to my friend Kevin at Coastal DCC and another £17.00 pounds spent. With that replaced, there was a further problem. Point #9 was the wrong way round. Sending close made it turn out and sending turn out made it close. Also, it was still self-centering at startup when I had switched that off for all the motors. Whilst I was with Kevin, I asked him about this and it seems that, very occasionally, the set/run switch gets a dry connection and, thus, programming the motor doesn't work. Fortunately, this is covered by their guarantee so Kevin will swap that over - hopefully tomorrow. In the meantime, I have swapped in #14 so that I could keep going.

The last activity that has been taking place is to put the wiring in for the switch display panel. To do this, I had to add a second wire into the frog polarity switch on each motor and run it out to the front. I have carefully numbered each one and wired them into a choc-block connector.

Here is a shot of the underneath with all of this in place. The red and black are the power bus wires and the yellow/green are the LED feeds. (I ran out of yellow!). 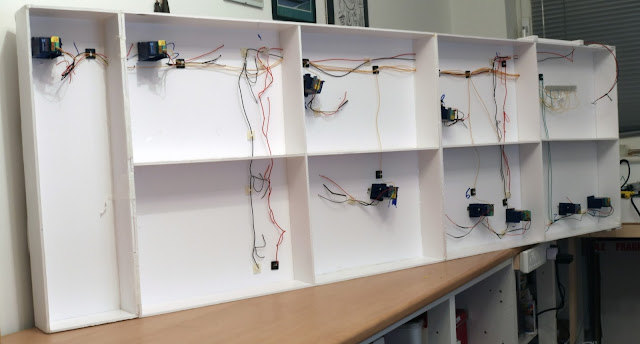 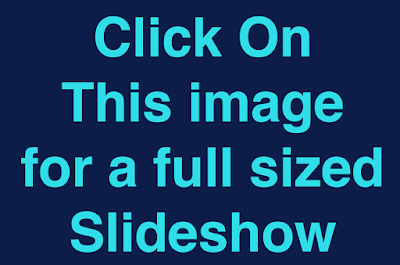 Posted by Long Haired David at 13:53 No comments: